A double shot of episodes to end Season 5 of Girls meant two times the relationship drama.

Hannah and Fran’s romance ended toxically (with references to The Crucible and a blasé call for an Uber). Marnie had a sex/love dream about Ray (in which he had hair like Khaleesi from Game of Thrones — only raven-hued). Elijah made a case to Dill about making their relationship monogamous — which was met with an absolutely crushing breakup speech from the egotistical newsman. Marnie finally admitted her love for Ray, leading to sex — and his decision to become her roadie while she’s on tour with Desi. And tension between Jessa and Adam erupted in a violent, screaming argument — complete with a hurled bicycle, the worst destruction of a bathroom door since The Shining, and Jessa’s declaration that she’ll never be able to forgive Adam for tempting her into betraying Hannah. 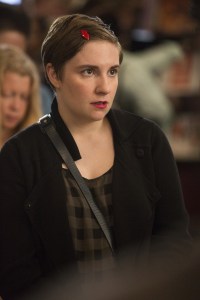 Oh, and in a stunning display of maturity, Hannah gave notice to Principal Toby, spent a crazy, carefree day with frenemy Tally, and rocked the Moth Story Slam with a tale about delivering a fruit basket to Jessa and Adam and hearing their explosive fight… which involved multiple mentions of her own name. (Plus, Hannah’s father Tad seemed to heed Elijah’s vice to find happiness where and when it arrives — and wound up back at his New York City suitor’s apartment!)

Below, series star Alex Karpovsky — who directed Episode 9 (the first half of the Season 5 finale) — talks about getting behind the camera of the HBO hit, breaks down the uncertain future for his character Ray when it comes to Marnie (and Shoshanna), takes us inside Elijah’s most emotional moment and more.

TVLINE | How did you wind up directing your first Girls‘ episode — and did you specifically want it to be an installment with a heavy emphasis on Marnie and Ray’s relationship?
Lena asked at the beginning of the production cycle if directing an episode would appeal to me, and she assigned me this episode based on what she felt I could or couldn’t do as a director. The episode prior, there was a lot of car stuff — a car accident, oral pleasure being delivered in a car — which presents a big challenge for someone who hasn’t directed in that space before. Episode 9 was a lot more contained and character-driven — and perhaps that’s why it was a good fit for me. It’s more coincidental that the Ray-Marnie stuff just happened to hit a boiling point. I’m not a method actor, I don’t have to live in my character’s skin all day, so it wasn’t hard to immerse myself, then come out of it. Also, seeing Lena be incredible at [acting and directing] over the last five years made it easier. We’ve all been quietly shadowing her on set, I think. 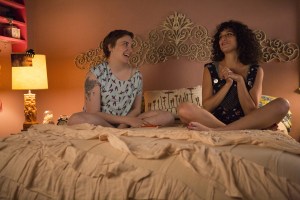 TVLINE | What was the most challenging scene in Episode 9 for you, as a director?
The scene toward the end of the episode where Jenny Slate (as Tally) and Lena (as Hannah) get high and talk. It’s long, it’s emotional, and tonally it tries to cover a lot terrain — there’s vulnerability, disclosure, insecurity — and there are some really funny moments, too. So the challenge was navigating among all those things and having it harmoniously flow and escalate — and avoid having it be a confusing cacophony of emotions and tonalities. It was difficult. At the end of the day, the editors did an amazing job, and Jenny just killed it.

TVLINE | Ultimately, the scene winds up being something of a lightbulb moment for Hannah, too. Were you aware of how Episode 9 would set up a finale where she returns to writing?
The writers have character arcs for everyone on the show, and the way I understood Hannah’s arc was that she’s finding herself again, getting her creative mojo back. And that involves making a lot of mistakes, dramatic gestures, abrupt decisions. Ultimately, though, it’s about getting her to a place where she realizes, “Maybe I shouldn’t be a public school teacher. Maybe I shouldn’t be dating a guy like Fran. Maybe I should be having more experiences and being more adventurous and ultimately putting those experiences into the form of writing and expressing myself.” She strayed away from that side of herself, and Season 5 has been, in a lot of ways, about reclaiming it. The scene we’re talking about with Tally was a pivotal step in that. And I tried to approach, understand and direct it in that context — with the idea of making it a stepping stone. 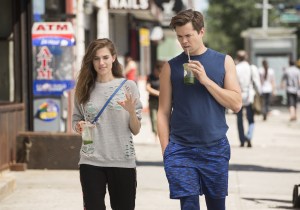 TVLINE | You also had to direct the scene at the top of the episode where Marnie has a sex dream — or as she calls it, a love dream — about Ray, ending with an orgasm. Where do you even start when you’re filming something that intimate and also funny?
One of the things I really like about Girls is that there’s a blend of humor and drama — a lot of the comedy is really grounded in believability — and we wanted that to be evident in the sex dream. It’s ridiculous, absurd and comedic, but it’s also a very authentic vehicle we use to advance story in terms of Marnie’s dynamic with Ray. She’s very confused emotionally about what’s going on in her life. To what degree is she coming to Ray to deal with the emotional trauma of the unravelling of her marriage to Desi? And to what degree does she feel there’s a real connection between her and Ray? That’s an ambiguity we wanted to navigate.

Not to get too technical, but the sex dream is one or two shots, and we had to figure out how to make the timing of the scene work. We had to give Allison a cue as to when the camera made it [from her feet] right up to her face. She needed to wake up at a very specific moment — timed to the movement of the camera. Usually, you’d signal that by throwing someone a look. But because her eyes were closed, we couldn’t give her a visual clue, so it took a second to figure that out. I think we ended up tapping her toe in the end.

TVLINE | Can Marnie and Ray make it work? I mean, before they kiss, she actually says to him, “It can’t be you.” That can’t bode too well in most relationships, anyway.
It boils down to how much they want it to work — how much effort and dedication they’re willing to commit to this enterprise. If they’re both willing to actually do the work — have some honesty, some surrender and some courage — there is a chance they can make it work. Whether these two people are willing to put forth that effort at the same time, that’s where I have my doubts sometimes.

TVLINE | Ray’s disdain for Desi is one of the funniest things on the show. Do you get a kick out of playing those moments?
It’s really fun. Evan [Moss-Bachrach] is an incredibly amazing and fun actor. You could make an argument he’s the guy on the show who is most different than his character. Some of us play caricatures or extensions of our real selves. For Evan, Desi is a complete and utter construction. Desi as a character, in Ray’s eyes, is douche-y and phony and a scoundrel. And Ray has a gray, amorphous haze of judgment swirling around him. With Desi, he’s really able to funnel it into one specific face, and one specific persona. And on top of it, this is the man who took his woman away — repeatedly. That charges the situation. For Ray, sometimes that’s destructive, but also it can be healthy to get it out of his system.

TVLINE | How do you view Ray’s decision to take Shoshanna’s advice and re-brand his coffee shop by waging a war on hipsters?
Ray hates hipsters. He’s very appalled and troubled by much of the gentrification happening in his borough, his neighborhood, his very block. He finds it all so phony, and creatively and spiritually bankrupt — their aesthetic and their conceits. He’s able to grin and bear it and look the other way until it arrives across the street and takes his business away. They’re draining his community of all the authenticity and character and history — and injecting it with something very perverse. I can very easily sympathize with that as a person who lives in Williamsburg [Brooklyn], and has seen it change entirely for the worse.

TVLINE | Shoshanna is the one who prompts Ray to embrace his cantankerousness and make it work in his business.
That’s always been part of their dynamic. Ray has all this rage and frustration and doesn’t know what to do with it. Shoshanna really opens the doors for him to find a way to use it in a way that’s tangible and constructive.

TVLINE | Is that romance done? They still have a closeness — and you could really see it in the moment she arrived at the coffee shop and they embraced.
They don’t tell us about where they’re headed with story arcs until we start cooking — and we don’t start cooking on [Season 6] for another few weeks. Ray and Shoshanna have a lot in common, though. They’re both oddballs in a way that often feels complementary. They’ve obviously had some good times together — and sometimes I think that might be fun.

What did you think of the Girls Season 5 finale? Take our poll below, then sound off in the comments!