Over the course of Crazy Ex-Girlfriend‘s initial 17 episodes, a whole bunch — or, more accurately, Bunch — of wacky, outlandish scenarios have gone down, from a Dr. Phil hallucination to a party-bus striptease.

But the most improbable scenario of all? That Valencia Perez would not only come around to liking Rebecca, but appreciating her. (We know!)

According to Gabrielle Ruiz, who plays Josh’s girlfriend on the CW musical-comedy, Monday’s season finale will find Valencia feeling particularly grateful for Rebecca’s presence in her life, romantic speed bumps and all.

“She has been in this relationship for so long. For Rebecca Bunch to enter into her world and rock it the way she did it and ruin it in a way — Valencia had to walk the walk versus just talk the talk,” Ruiz tells TVLine. “She was ready to be at bat. She was ready to go for it.”

The Season 1 closer will take place at Josh’s sister’s wedding, which Ruiz says will open the door for big developments in Valencia’s relationship with Josh. Read on for her finale insights, including what it was like to work with Broadway vet Lea Salonga (guest-starring as Josh’s aunt) and the musical number she’s most excited for fans to see.

TVLINE | In this week’s episode, it seemed like Valencia was taking her responsibilities as a member of the wedding party really seriously. Will that continue in the finale?
Valencia finally has a chance to be a girl with girls, because she’s never really had girlfriends before. She has some happiness and enjoys the fact that she was accepted among a group of people that she’s been wanting to be accepted by for so many years, especially the family. 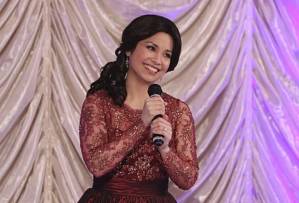 TVLINE | You and guest star Lea Salonga both have Broadway experience. Was this your first time meeting her, or had you worked together before?
No, I’d never worked with her before. I was just trying not to be a fan with her because she sings “A Whole New World” — my favorite Disney princess [is Jasmine]! [Laughs] She’s iconic, as well as a fantastic human being and colleague, and so the first time working with her was really exciting and a privilege. Her [Broadway] show Allegiance just closed, and we wanted to have a guest star that was in Josh’s family, and what a perfect person to have. And it was a wedding episode, so a lot of stories come to a head…. Her character and Valencia have a few things in common and it was fun to play

TVLINE | In the last few episodes, we’ve heard Valencia tell Josh that they’re stronger as a couple, since Rebecca has tested their relationship so much. Does she really believe what she’s telling him?
Absolutely. She is fully committed. She’s at the finish line, and she absolutely believes that they should take the next step. I love that Valencia is not only bossy and selfish, but she also does love him. And there are those people — or, more specifically, women — that don’t know how to express that in a way that everyone can respond to. I don’t think [Valencia] knows how to do it, either, and she feels uncomfortable when it comes to that kind of love. With what they went through in Season 1, it softened her and she’s really grateful Rebecca Bunch entered her life, because it challenged and provoked their relationship to be at this point… So I do think she loves him.

TVLINE | We also saw this week that Josh was pretty angry to hear Rebecca and Greg are hooking up. Will Valencia become aware of how upset Josh is?
She’s not aware specifically of what’s going on. And if she is, she’s in denial. She’s at a point with the wedding and the family where she’s not going to [jeopardize] her goals, which is getting engaged, getting married and moving forward in their relationship. So either she doesn’t see what’s going on or she’s in denial and she’s ignoring it. I don’t think she wants to make a scene at the wedding.

TVLINE | What can you say about the wedding itself? Any big surprises or fun moments that stood out while you were filming?
My favorite musical number, dare I say, is at the wedding. There’s a really great prop that they use to get this dance number going. And it’s actually not a hallucination, it’s an actual dance at the wedding.

TVLINE | Do you have any solos or big musical moments?
Not me. There are some other solos in the wedding, for sure, but not Valencia. She just has big moments, like a lot of the characters for the finale.