Orphan Black didn’t just channel its pilot during Thursday’s Season 4 premiere. It turned the clocks way back to tell the tale of how Beth spiraled so badly that she would eventually take her own life.

In an unexpected move that had me scratching my head and then squealing in delight, the episode kicked off with a phone call not to Sarah, but Beth, as she slept in bed with Paul (former cast member Dylan Bruce). And those two weren’t the only departed characters making an unforeseen reappearance. As the detective followed new clone M.K.‘s intel, she got tangled up in a Neolution plot that also featured the returns of Dr. Leekie (Matt Frewer), Olivier (David Richmond-Peck) and his little tail, too.

High on drugs and highly suspicious after a pivotal fight with Paul, Beth found comfort in Art’s embrace. That same night, she accidentally killed Maggie Chen after witnessing a Neolution implant being removed from someone’s cheek… by a fellow detective. Even though Art promised to help cover up the murder, Beth realized she could no longer trust anyone.

TVLINE | Why did you decide to have the premiere take place almost entirely in the past and from Beth’s point of view?
GRAEME MANSON | It was an early idea. We always felt that we left a lot of answers on the [train] tracks, and that someday we would figure out a way to loop back into Beth. We set the table a little bit in Season 3, Episode 6, where Sarah had an otherworldly dreamlike encounter with Beth, which we really liked. Then it just occurred to us that in a season where we really wanted to go back to the beginning…that now is the time to do it.
JOHN FAWCETT | It was very much, in Season 1, the feeling – or certainly amongst Graeme and I – that Beth knew more than we let onto. We always knew that she was deeper in the mystery than Sarah discovered in Season 1. There was an awful lot of talk about who [Beth] was, and there is just a very mysterious nature to that. So by ending Season 3 with this feeling of resolution and having answered a lot of the bigger questions and closed the door on [Project] Castor, we’re now in a place of reasonable safety. It was a great place to try to discover what Beth knew.

TVLINE | When we meet Beth in this episode, she’s already in the thick of it. Are we ever going to learn how she became self-aware and got to know Alison and Cosima?
FAWCETT | We talked about it. We definitely discussed a deeper, bigger Beth backstory, but Graeme and I felt that considering the pace that we like our stories told at, it was better if we landed the audience right in the middle rather than go too far back. That’s all really interesting — how did Beth discover that she was a clone? How did Beth find Cosima? How did all those things happen? — but those are very time-consuming story elements and aren’t as thrilling as landing in the middle. 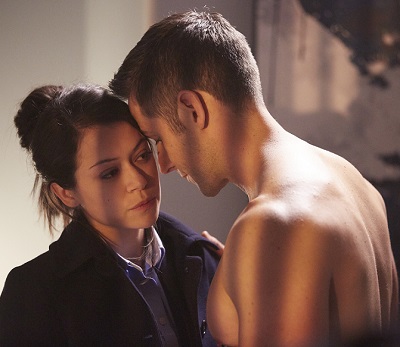 TVLINE | Beth and Paul had this very intense confrontation scene.
FAWCETT | It really is about that return to Season 1, where Paul is her monitor and she is suspicious of him. We’re not entirely sure what Beth knows about Paul exactly. She is amped up on drugs. She loves him, but is very confused and paranoid. So it made for this very, very dangerous [and] fraught exchange between the two of them. It was actually Tat [Maslany] that said, “I want to take off my dress.”
MANSON | I distinctly remember that the first image we had, that we kept coming back to, was her raising the gun to his head without him knowing — and that getting caught on the surveillance footage. Because we were aware that we were telling a story in the past and we had to stay aware of what that story means to us in the present. We knew we were going to see that moment again.
FAWCETT | It’s a very emotional scene because Beth is at her wit’s end. The fact that she pulls out the weapon here just shows her state of mind and where she is in her journey, and it’s a frightening place. Really, a big part of this was mapping out what took her to the tracks, what wound up leading this character, who was an upstanding police officer, into drugs and, ultimately, to suicide. Just by stepping into her skin, it automatically makes your story darker. 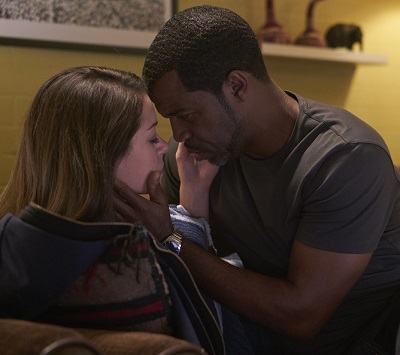 TVLINE | We also found out that Beth and Art had a very intimate moment.
MANSON | When you go back and you rebuild that timeline, that’s a painful time for Art because…it wasn’t that long before Beth stepped onto the tracks and Sarah stepped into Art’s life. But Sarah’s been so important for how Art processes that moment.
FAWCETT | I think that Art wishes in hindsight that he’d been able to help her, that he’d been able to save her. With a lot of our characters in Season 4, they are haunted by the past and things that they’ve done or wish that they could have done. Right out of the gate, we’re going to very graphically see why Art is driven to help — not just haunted by Beth, but driven to help Sarah in her quest going forward. And then of course, there’s the fun of, what male cast member has Tat not kissed? Now, it feels like she’s kissed pretty much them all.

TVLINE | How will M.K. and her connection with Beth propel Sarah and the current story arc forward? 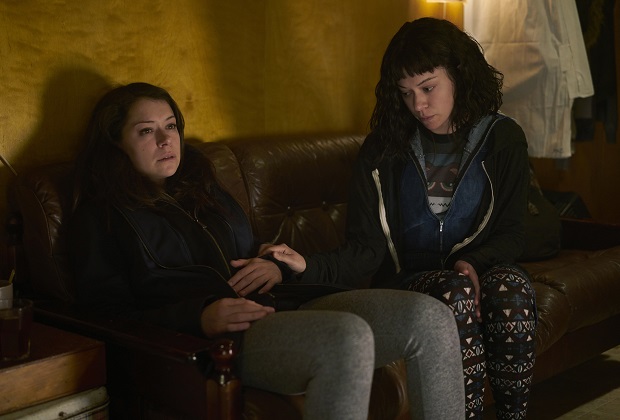 MANSON | M.K. is Sarah’s engine this year that she can turn to, and that’s not easy. You don’t just turn to M.K. and get an answer. She’s a skittish character and hard to work with and hard to get answers from. But she is Sarah’s one window [into] some of the big questions that appear at the beginning of the season.
FAWCETT | She’s a window in the sense that she knew Beth, so she had a sense of where Beth was at in [her] own investigation. But she’s [also] just good at getting information. She’s a hacker, she’s got skills, and she’s very resourceful and good at getting information. She was Beth’s informant.

Orphan Black fans, what did you think of the season opener? Grade it via the poll below, then hit the comments to back up your pick!