Grizzled gunslinger Jonah Hex knows what time it is, so to speak, in this exclusive sneak peek from tonight’s DC’s Legends of Tomorrow.

In the episode “The Magnificent Eight” (The CW, 8/7c), Johnathon Schaech (Star-Crossed, Quantico) guest-stars as the DC Comics antihero, who can spot a buncha out-of-place, out-of-time out-of-towners when he sees ’em. In the video above, Hex calls out Professor Stein and his posse, asking to speak to one of them in particular.

“Rip has been time-traveling and sorting out the timeline for many years, so he definitely knows who Jonah Hex is,” the captain’s portrayer, 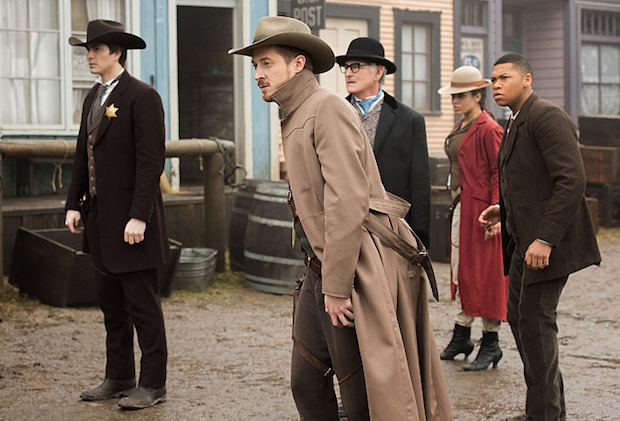 Arthur Darvill, told TVLine during a set visit. “He’s even got a ‘Wanted’ poster for Jonah in his study. If you look really closely in the Waverider, you may have seen it.”

Darvill says that revolver-wielding Rip has “that cowboy feel” and thus “feels very much at home in the Old West.” Some Legends castmembers meanwhile felt at home in the old-timey era’s wardrobe. Says Brandon Routh, who plays Ray: “Putting on the Western garb was my most fun costume change that we’ve gotten to do.”

Will gruff Jonah ultimately warm up to the Waverider team’s predicament and help them along in their journey? “We don’t know at first,” says Darvill. “Like a lot of our villains and shady characters, he’s a begrudging companion* to the team in the end — even though he thinks we’re crazy, and rightfully so!”

Are you looking forward to Jonah Hex’s arrival in TV’s DC Comics-verse?