There’s a 16-minute stretch of Confirmation — premiering Saturday at 8/7c on HBO — that’s absolutely riveting: Oklahoma law professor Anita Hill sits before the Senate Judiciary Committee and slowly, painstakingly testifies about the sexual harassment she endured while working for Clarence Thomas, whose nomination to the U.S. Supreme Court is under their review.

Scandal‘s Kerry Washington plays Hill with quiet resolve. She’s a reluctant witness, we’ve been reminded over and over again, but despite the slightest tremble in her voice, she maintains a deliberate, just-the-facts cadence as she tells the powerful men in front of her about the romantic overtures repeatedly made by her one-time boss Thomas. There were his attempts to discuss graphic pornography (bestiality, group sex, rape). There were references to the the size of his own penis and his sexual prowess. There was even the infamous recollection that Thomas once asked her, “Who put pubic hair in my Coke?”

As Hill’s testimony and the senators’ questions drag on for hours — Republicans on the panel wanted to make sure Thomas’ rebuttals began in primetime — Washington lets us see the weariness of a woman mortified about discussing such unseemly topics while her elderly parents sit behind her, and also her confusion and embarrassment about why she never reported these misdeeds, and how she wound up following Thomas to a second place of employment.

What’s fascinating — and disappointing — about Confirmation is that we somehow manage to learn more about Hill in the recreation of scenes that are essentially dramatic re-enactments of C-Span clips you can watch right now on YouTube.

That leaves about an hour and a half of bloodless storytelling that ping-pongs from law offices to congressional corridors to Thomas’ living room — allowing a huge, all-star ensemble to do their best impressions of the hearings’ major power players without offering any real insight into how the proceedings personally affected them, and reducing Hill and Thomas to pieces on a political chessboard. 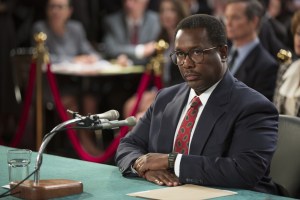 The script by Susannah Grant (Erin Brockovich) may be faithful to the historical record — but it comes at a price. Over and over, we see Thomas (played by The Wire‘s Wendell Pierce) sitting in the shadows with an unknowably grim expression, as his wife Virginia (The Americans‘ Alison Wright) stares at him with a combination of sympathy and inquiry. But the scenes are so vague, it leaves you wondering why Grant didn’t focus the picture entirely on Hill — allowing us to know the living, breathing woman at the center of the action. When Hill goes home to tell her parents there’s a firestorm of media attention about to descend on their family, for example, the camera zooms out from the full exchange, leaving us with a blurry impression, rather than anything tangible.

Director Rick Famuyiwa (Our Family Wedding), meanwhile, falls into a predictable rhythm: Scenes of Republicans (led by Bill Irwin as Sen. Jack Danforth) and Democrats (Greg Kinnear’s Sen. Joe Biden chairs the committee) jockeying for position while covering their own butts; a Big Dramatic Reenactment (with arched brows and tense exhalations and pursed lips as the key players stand on the sidelines); and then some old news footage (Peter Jennings, Tom Brokaw, Dan Rather clips all figure prominently) clueing us in to the public’s fickle sympathies over the course of the hearings. (It should be noted that Zoe Lister-Jones, as Biden aide Carolyn Hart, consistently steals scenes with the subtlest of gestures)

Famuyiwa and Grant remind us during the closing credits that Hill’s moment in the spotlight raised awareness of sexual harassment in the workplace — and may have led to the election of a record number of female members of Congress in the next election cycle. But given Confirmation‘s lack of dramatic purpose, these beats play like footnotes on a term paper, and not an especially compelling one at that.

The TVLine Bottom Line: Washington shines when her character takes the stand, but there’s little else in this pokey picture worth your “yes” vote.