Raise your hand if you’re going to have nightmares after Monday’s The Magicians.

The Season 1 finale featured so many disturbing images and twists — not to mention, some purely weird ones — that I need a hedge witch memory patch of my own so I’m not haunted tonight. (I haven’t read the books, so I don’t know how much of the installment came from the producers’ imaginations and how much was pulled from the source material, but either way, you can’t deny that the Syfy series is ballsy.)

Before things get very dark, the episode begins with Quentin and Julia delighting in the wonders of being in Fillory. Imagine if you were transported into your favorite TV show and became part of the storyline. It’s like that, with the added bonus of .02 percent opium air, Quentin discovers. Along their quest, the pals encounter several familiar Fillory characters, including a grownup Jane Chatwin, who is the feared Watcherwoman. She tells Quentin that Julia has a patch in her memory that is “covering something tragic, replacing it with something beautiful but false,” and that he needs to protect his friend. Then she transports them to Fillory 2016, a desolate place destroyed by The Beast, so they can meet up with Quentin’s classmates.

Putting aside the awkwardness that results when you’ve all slept with each other, the group heads to the knife maker to get the blade needed to kill The Beast. In exchange for it, one of them has to marry the knife maker’s daughter, and that person is destined to be High King of Fillory, as chosen by a magical knife. Quentin is sure it’s going to be him, but lo and behold, it draws blood from Eliot. Although it means he can never leave the magical land or be with anyone else, Eliot goes through with the marriage because it might give his life a bigger purpose. 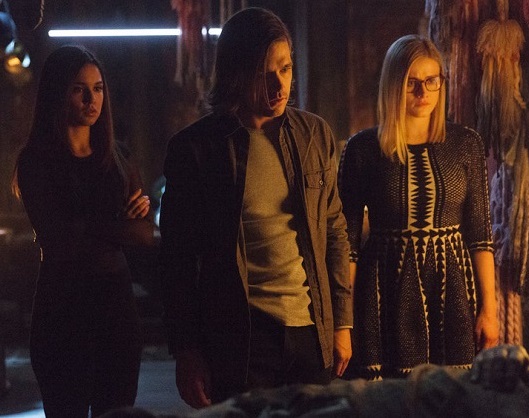 Now in possession of the blade, the group discovers it can only be handled by a master magician, and so far, none of them meet its qualification. Quentin and Julia visit Ember the ram god, who gives them a jar of his semen so they can possess his strength. (Yes, for real.) Then he takes away the patch in Julia’s memory, leading to an emotional breakdown. More bad news: The Beast isn’t Plover, as they suspected, but Martin Chatwin!

Quentin wants to be the chosen one to take down Martin, but in his heart, he knows it should be Alice. “You’re a better magician, and you’re a better person,” he confesses to her. “The adult part of me keeps screaming that it’s you… What if I change something? What if I give the blade to you?” So Alice “bogarts” the semen — “Pretend it’s prom night and you just want to shut him up,” Margo advises her — and off they go to fight The Beast. However, when they encounter him, Alice’s blade goes missing. Martin causes her to bleed out and cuts off Penny’s hands with a flick of his wrist. It’s all looking very grim for the gang when Julia puts the blade to Martin’s throat.

In Quentin fashion, let’s rewind: that memory patch (via Marina) was covering up something tragic, indeed. While summoning a god, Julia and her friends were fooled by a trickster. He raped Julia and killed the others, while Kady got away. So Julia, too, has the semen of a god, which allows her to wield the blade — and she wants to make a deal to exact revenge on the god who ruined her life. With that, Julia and The Beast disappear as Quentin looks on, the others lying on the floor in various states of agony. Sweet dreams, kids!

Magicians fans, what did you think of the Season 1 ender? Grade it via the poll below, then hit the comments to back up your pick!