No one will accuse NBC’s new revenge thriller, Game of Silence (premiering Tuesday at 10/9c, before settling into a Thursday timeslot), of being subtle.

Baddies do everything but twirl their mustaches around their pinky fingers and cackle as they put their nefarious plans in motion. The good guys each seem to have been plucked from The Directory of Stock TV Characters (Chapter 23: “Reunited Childhood Friends With Issues”). Fists get slammed on barroom tables, accompanied by lines like, “We’re talkin’ about justice!” 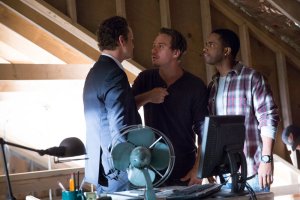 And yet while not even the show’s executive producers — David Hudgins (Parenthood) and Carol Mendelsohn (CSI), among others — could reasonably put Game of Silence on their Emmy shortlists, the show’s zippy pacing and “don’t take this too-too seriously” vibe make it as easily digestible as a bowl of applesauce. It’s almost as tasty, too, even if there’s no way you’d serve it to guests at a dinner party.

David Lyons (Revolution) stars as Jackson Brooks, who at the age of 13 and filled with well-intentioned teenage bravado, wrestled away the car keys from his girlfriend Jesse’s drunk mother, jumped behind the wheel, and promptly crashed head-on into an innocent stranger’s vehicle. Jackson’s trio of friends who were along for the ride —  Gil, Shawn and Boots — all received identical nine-month sentences in the Quitman Youth Detention Facility in their home state of Texas because… well, the premise of the show wouldn’t work otherwise. (Rule No. 1 of Game of Silence: Make sure you have enough popcorn in your bowl to avoid pausing and refilling, and thereby finding yourself questioning its logic or continuity.) 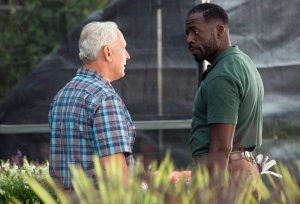 Quitman might as well have the tagline “Welcome to Hell on Earth” emblazoned across its gates — and it’s not long before our quartet of protagonists realize that physical, psychological and sexual abuse are just some of the tools used by Warden Roy Carroll (CSI‘s Conor O’Farrell, generically menacing) and his uniformly complicit staff.

While Game of Silence doesn’t inundate viewers with hard-to-watch flashbacks, Hudgins doles them out with just enough frequency and unquestionable horror that you’ll quickly root for the demise — by legal means or street justice, it hardly matters — of Carroll and his cronies, who now have power extending to the top reaches of Texas government and the illegal drug trade. 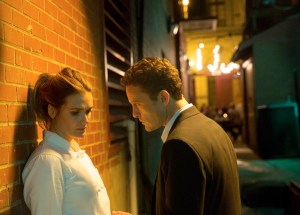 Does Jackson slip into a double life far too easily for a guy who’s just made partner at his firm? Sure. Is it all too convenient that he and Jesse still have an undercurrent attraction — and have maintained ridiculous levels of hotness — after 20 years apart and plenty of insomnia-inducing flashbacks in the interm? Yeah, OK. Do scenes of villains meeting in parked cars and anonymous drop points suffer from a lack of lack of specificity and originality? All signs point to yes.

Still, Lyons and James in particular somehow manage to make you feel their indestructible bond — forged in the heat of tragedy — despite the fact that their characters now live in entirely different worlds.

As the stakes of their revenge pact rise higher, and their ingenuity and morality get tested against seemingly unbeatable foes, don’t be surprised if you’re less and less bothered by the little fumbles in writing as you get more and more engrossed in the bigger picture.

The TVLine Bottom Line: While it falls on the guiltier side of pleasure, you may find yourself unable to stay quiet about Game of Silence‘s addictive qualities as the 10-episode drama unfolds.