Joan Watson got quite a shock during Sunday’s Elementary when she found out the woman in need of her and Sherlock’s help is actually her half-sister.

The P.I. and her newly discovered sibling Lin (played by CSI: Miami‘s Samantha Quan) got off to a rocky start when the latter implied she was in a relationship with Mycroft… at the same time as Joan! But like a true sis, Lin was just trying to get under Joan’s skin. Her actual secret is more familial: Before Joan was adopted and became a Watson, the two women shared the same last name, courtesy of their father.

The twist certainly adds a new layer to Joan’s already complicated history with her dad, who was mentally-ill and left his first family.

Below, executive producer Rob Doherty reveals how Lin came to be and how much she’ll be around in Joan’s life. Plus: Will Papa Watson make an appearance?

TVLINE | How did the idea come about to add a half-sister for Joan?
The kernel of the idea came from Carl Beverly, who is an executive producer of the show. Carl doesn’t write the scripts, but he’ll lob in story ideas every once in a while. It had never really occurred to me that we had the opportunity to tell this kind of story. I was drawn to Joan’s story, this idea that she never really knew her dad and that he was a damaged and troubled guy who fell out of her life a long time ago. Carl helped me remember that that man had a history of his own [and] that it was certainly possible that he regained himself for a short time and had a different family. It was just an alluring area code for us. We also felt that we have spent a lot of time getting to know more of Sherlock’s extended family this season. It struck me as a good opportunity to delve a little deeper into Joan and her family. 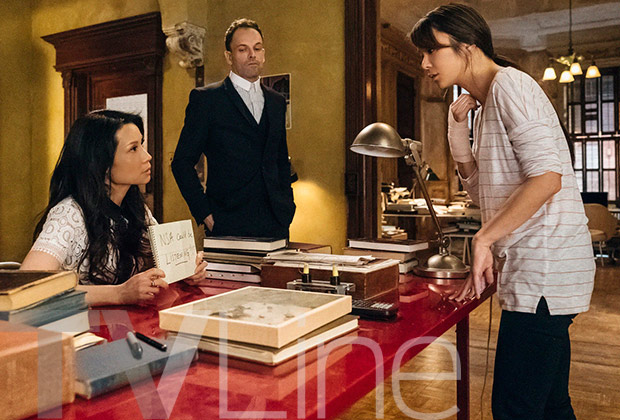 TVLINE | Lin is so spunky. Was there a desire to add a different kind of voice to the show?
No, it wasn’t born out of that. Before the story was developed, we spent a lot of time talking about the character’s bio — what was her upbringing like? What was her relationship with dad? What we settled on was this idea that she got to know dad a bit more than Joan [and] was probably more stunned when he left. Unlike Joan, she has some awareness of his other family. And I liked the idea that she resented Joan. If you look at Joan Watson on paper, she is a success. … Specifically how she talks to Joan has a lot to do with assumptions she’s made about who Joan is. As far as her living a little more on the edge, I think that just comes from her having a more hardscrabble life.

TVLINE | Joan leaves the door open with regards to them having a relationship. So how much of a presence will Lin have going forward?
We won’t see Lin again this season. That mostly has to do with where we were in the season when we finally developed the two Lin episodes. Once we get past those, we’re really into our end run that wraps up the season, and that’s Morland-centric. So it’s not that we don’t want to see Lin; she didn’t quite fit in the story. But we’d love to see her again next year. We like the actress very much. We had fun seeing the sisters together. I know Lucy [Liu] had a good time. It’s a matter of finding the right kind of story to pull Lin back in.

TVLINE | The characters did leave off on a good note.
[But] we tend to set the table that way and then yank the tableclothes off. [Laughs] And we’ve certainly established Lin as someone who makes the occasional very poor decision. I could see her needing some help from Sherlock and Joan again. Truth is I’d love to find a situation where she can be helpful to them. I don’t want her to just be the sister who gets into trouble. There may be a time to pull Lin together with other members of Joan’s family. We’ll just have to see.

TVLINE | Does this twist open up an opportunity to spend some time with Joan’s biological father?
It’s nothing we talked about for this season, but it came up. It’s such a natural progression. One of us on the staff has to have the right pitch for who he is and where he is now. It’s tricky. We’ve explained in several episodes now that he’s diagnosed as a paranoid schizophrenic. It’s a challenging thing to write, too. Usually, we seize opportunities like that to dig a little deeper into things like the neuro-atypical nature of [Sherlock’s girlfriend] Fiona. But it’s tough. To have Joan’s biological father on the show, we need someone that she can dialogue with. The nature of his disease can make that difficult depending on where he is these days and how he’s treating himself. We just want to make sure if and when we meet dad, we’re doing it the right way.

Elementary fans, what did you think of Joan’s surprise sis?