Within the first four episodes of TBS’ new comedy The Detour, Jason Jones’ Nate takes a jar of urine to the face, his wife Robin (Justified‘s Natalie Zea) finds herself on the receiving end of her kids’ projectile vomiting, and then Nate drops trou in a theme-restaurant parking lot and proceeds to have a violent, graphically noisy bowel movement.

I won’t pretend I didn’t let out a burst of laughter during each and every one of these moments — who doesn’t like a little gross-out humor? But despite a solid pilot episode and exceedingly game performances from its leading couple, it doesn’t take long (maybe five minutes into Episode 2, when Robin describes the taste of semen to her pre-teen kids) before The Detour begins to collapse under the constant strain of trying to shock us. 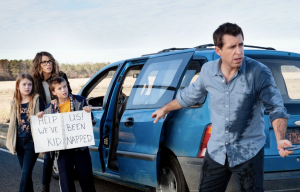 That’s a shame, really, considering there are moments of The Detour (executive-produced by Daily Show vets/spouses Jones and Samantha Bee, and premiering Monday at 9/8c on TBS) that play like an x-ray, and show the skeleton of a series with the potential to be TV’s answer to The Hangover, Bridesmaids and We’re the Millers — big-screen successes built around ordinary folks who fall deeper and deeper into ridiculous hijinks.

The premise is a tight one: On their way to the Syracuse Airport for a long-anticipated vacation in Florida, Nate surprises his sleeping family by veering left and opting for a 17-hour road trip instead. As we soon learn in flashbacks, though, Nate’s decision isn’t entirely motivated by a love of cost-cutting and a yearning for family bonding — and it’s not too much of a spoiler to say the action eventually cuts to flash-forwards of Jones’ character in an FBI interrogation room. 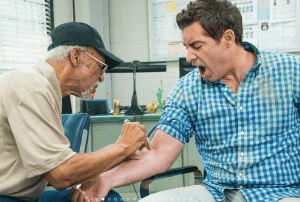 Jones has a real knack for showing the barely suppressed rage and anxiety percolating just beneath the surface of his harried breadwinner — he makes a scene where he puts out his boss’s e-cigar with a fire extinguisher much funnier than it should be — while Zea is a comedic revelation as her tightly wound housewife continuously (and sometimes boozily) lets her inner freak flag fly.

Unfortunately, The Detour too often confuses the obvious for the outrageous, and mistakes hacky-ness for hilarity. Episode 4 finds Nate and an Asian man dressed as a knight getting into an extended argument over the use of the phrase “chink in his armor” — a deeply labored arc that ends with an angry, shirtless dwarf falling headlong into a fountain. (Yep, I’ll pause this review for a moment so you can let out a groan.) In an earlier episode, the family stays in a motel where the employees keep pronouncing Nate’s surname (“Parker Jr.”) as Parkerjur. (It gets really old really quickly). Did I mention the ongoing cliché about the doltishness of Nate and Robin’s son Jared —  expressed through not-nearly-funny-enough details like legitimately thinking Pennsylvania is pronounced “Penis-sylvania” or that women are impregnated through their foreheads?

The frequency and egregiousness of such missteps prove unwelcome roadblocks to The Detour‘s comedic rhythm. And thus, while you might be tempted to hop into the minivan with the appealing Jones and Zea, chances are you’ll soon be looking for an off-ramp.

The TVLine Bottom Line: Despite a few genuinely funny moments, you’re better off leaving this one on the side of the road.