Is it me or is it… chilly in here?

The muted color palettes and quietly ominous soundtrack, which sneaks up and blares like a kettle reaching its boiling point, help to create a world in which intercourse is as easy and transactional — and in no way messier — than, say, buying a pair of shoes on Zappos.

Christine (Riley Keough), the protagonist of this tale, is as cold and detached as the stainless steel countertops and cream-colored hotel duvets that surround her. “I don’t like spending time with anyone unless something is being accomplished,” she tells her sister (played by Amy Seimetz, who writes the series along with Lodge Kerrigan), before brushing off her invitation to hang out together for the weekend. 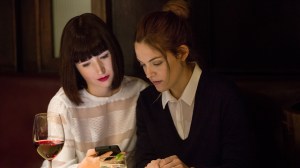 Christine’s at-arm’s-length approach to life serves her well when she decides to add escorting to her already busy schedule as a law student and intern at a powerful firm. She’s introduced to the idea by her best friend Avery (Kate Lyn Sheil), who’s “dating” an older, married man with the added bonus of being able to live at his suburban mansion and drive his barely used sportscars.

When Avery slips Christine a fat envelope of cash in the middle of a double date with her boyfriend’s middle-aged pal, there’s not so much as an “awww, hell no!” or even a raised eyebrow. “It’s just a gift,” says Avery, but they (and we) are fully aware what that gift implies. And before she knows it, Christine is calling herself Chelsea, working for an agency headed by the smilingly cutthroat Jaqueline and “burning the candle at three ends.”

Keough’s performance is so muted — it’s her job to listen and ask questions and f–k, she notes at one point — that it’s hard to tell how she feels (or if she feels anything at all) about entering the world’s oldest profession. Is this merely a way to pay her law-school bills and ensure her future in a more socially acceptable career? Is she gathering intel about the inner lives of powerful men to help her navigate the increasingly high-stakes game of office politics at her firm? Is she possibly a sociopath? (Christine actually asks the latter question after a phone call from a client’s wife that ends with her unironically noting, “I don’t accept checks.”) 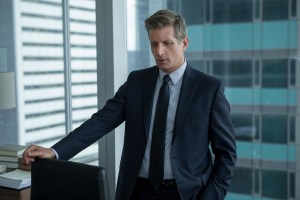 Christine’s flirtation with her powerful law-firm boss David (House of Cards‘ nastily charming Paul Sparks) suggests a more dangerous, visceral arc to come, but it, too, takes its time unfolding through terse snippets of conversation and the subtlest of glances through glass office windows.

Ultimately, in the four episodes screened by TVLine, The Girlfriend Experience proves more interesting than engrossing, perhaps because there doesn’t seem to be a single character willing to raise his or her voice above library-corridor volume, connect in any way that’s not ultimately about money or power, or overtly express the possible negative side effects of selling your body for cash.

The TVLine Bottom Line: Like the services Christine is offering, The Girlfriend Experience definitely has its pleasures, but they’re more ephemeral than enduring.