In Entertainment Weekly‘s just-released cover story on Netflix’s Gilmore Girls revival, Lauren Graham hints that the climactic exchange — rumored to be shared between Lorelai and Alexis Bledel’s Rory — is more cliffhanger than closure. “It’s not as resolved as I thought they would be,” she tells the mag. “I keep saying, ‘Hey, does anyone else notice this is actually not an ending?’ Amy and Dan just giggle at me.” 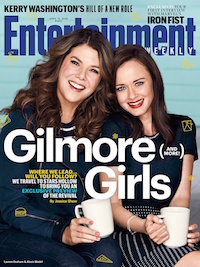 Bledel, meanwhile, concedes that, “It does kind of throw you.”

Far less ambiguous is the status of Lorelai’s relationship with longtime love Luke when the action picks up eight years after the series finale. The EW piece confirms that the duo are still not married.

Sherman-Palladino, meanwhile, re-extends an invite to Melissa McCarthy to return as Sookie. (As you’ll recall, MM insists she never received the first invite.) “We’ve just put it out into the universe; we’re here until May 10,” she tells EW. “I know what the scene is. I’ll pre-light it for her. She can drive up, run in, shoot it, and run out. I can get her in and out in two hours.” (Update: She’s doing it!)