Like a gaggle of indignant gay men using a rainbow of flip-flops and a reworked hip-hop jam to shame their favorite out star for allegedly sleeping with a woman, this week’s Empire was every shade of random. 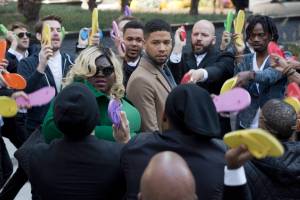 Honestly, if Mulder and Scully knocked on my apartment door right now and told me I’d been abducted three or four times over the course of the hour, I’d actually feel a sense of relief. “Ohhhh… thank goodness! The writing on Fox’s flagship drama didn’t suddenly and inexplicably become slapdash: It was just those little gray dudes and their giant bulging eyes performing a series of invasive tests on me!”

For those keeping score at home, by the bye, you can now raise the count of “Lesbian Characters Recently Killed Off on Drama Series” to six: Score two for The Vampire Diaries, one for The 100, one for The Walking Dead and now a double pump from Empire. (Somewhere, the Governor of North Carolina is clapping alone in his living room.)

And in the case of Camilla and Mimi, their offings carried all the dramatic weight of when you empty your kitchen dishdrain filled with leftover cereal flakes into a trash bin.

As Wendy Williams would say, “A mess!” Even this week’s original songs had me like O_0.

I’m going to consider this a transitional episode — abruptly ending arcs of actors no longer available to the show, and (hopefully) planting some seeds that will bear fruit between now and the season finale. Therefore, let’s keep it pithy and recap the action from Season 2, Episode 12, “A Rose By Any Other Name.” 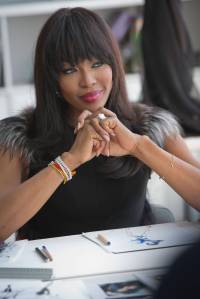 YOKO, OH NO! | It turns out Hakeem is back on Team Lyon, agreeing to help Cookie, Jamal and Andre bring down his lover/”Mama” (eeeewww!) Camilla — and he finally strikes the fatal blow by secretly videotaping their sexcapades (and her admission that she’s just waiting for wealthy wife Mimi to die). ‘Keem sends the tapes to Mimi, which prompts Marissa Tomei’s unseen character to sell off all her shares in Empire — as Andre & Co. snatch ’em up. Next thing we know, there’s Camilla, wiping down Mimi’s hotel room — where she just poisoned her cancer-stricken spouse and staged her drowning in a tub. (What in the actual whaaaat?!) If that’s not enough ridiculata, Lucious has caught the whole thing on his cameraphone. (Did he have an invisibility cloak?) He tells Camilla she’s not built for the death threats, the rape and the squalor of prison, and so she tearfully downs a shot of poison as Lucious points a gun at her. Note to Empire cast: You are all forbidden to use this episode as your Emmy submission reel. 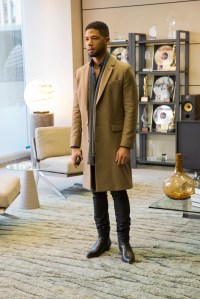 DADDY ISSUES | I did not make up the “gays with flip-flops” story above (see photo above) — even though we gays really don’t go for flip-flops — which leads to Jamal learning from Jameson that it’s Lucious who’s spreading rumors about his tryst with Skye. Jamal responds with a song so terrible, it seems like a bigger threat to his career than a visit to the Land of Verboten Ladyparts, but whatevs! Bottom line is he knows his dad would sell him out for an American Sound Award — and so he tips the world off to the fact that Lucious Lyin (a typo, but it fits) is actually Dwight Walker. And then Lucious agrees to tell his whole “homeless orphan” backstory to a reporter from the tragically titled Q&A News who is definitely up to something nefarious. 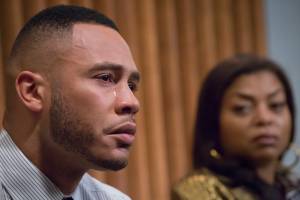 TAKE ‘EM TO CHURCH | Did I mention Andre refuses to go to a doctor and recalibrate his meds – and his pastor is all “He’s also in God’s care — which is far more powerful than any doctor’s medicine”? Rhonda throws every inch of her body into a side-eye — and rightfully so — since Andre is accusing her of cheating now. But then Hakeem and Jamal drag him into the same sound booth where he tried to kill himself and say, “Oh, you’re on the verge of a psychotic break? Here’s a song we wrote for you! That should help everything!” Everyone has tears in their eyes, but mine are because I just want the episode to be done and then next week everything can get back on track. Also, Rhonda was working for Camilla’s new and ridiculous fashion line — but now Camilla’s dead. And Tiana has a new “song” that sounds like her shaking her booty in a sequined bodysuit. And Laura might disappear on tour as an opening act for with Tiana — which is OK, because I already have “Bottomless Mimosa” on my iTunes. (OK, the song is just called “Mimosa,” but my title’s better.

What did you think of this week’s Empire? Did you find it as bizarre and befuddling as me? Hit the comments — and do your best to help me make sense of it all, if you’d be so kind!