As hard as the last 11 minutes and 19 seconds of The Walking Dead’s sixth season finale may have been on us, they were even harder on the cast: Negan’s debut took “a very emotional two nights” to complete, according to the bat-wielding villain’s portrayer, Jeffrey Dean Morgan.

Showrunner Scott M. Gimple goes so far as to call the shoot “unbelievably emotional. Even though it was freezing cold [and] these actors were on their knees pretty much the entire time… [they] knew that someone would die, [so] everything [was] incredibly loaded… Everything seemed to get more and more real.” 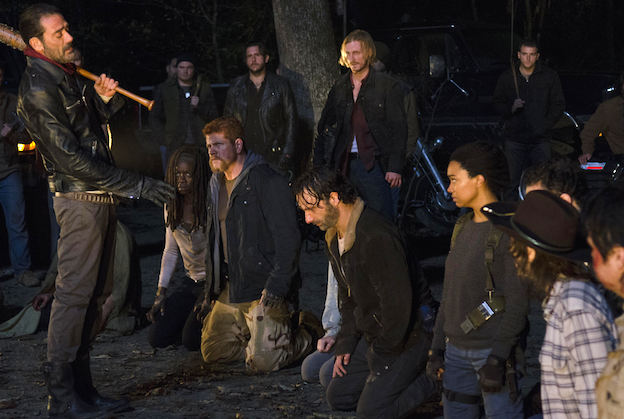 So much so that, when Morgan made his entrance at the end of the Saviors’ “Career Day,” it was Pee-Pee Pants City. “For a lot of the cast, when Jeffrey walked out of the RV, that was the first time they saw Negan,” says Gimple. “It was one of the most incredible professional experiences I’ve ever had.”

It’s unlikely to be one that Morgan will forget anytime soon, either. “People were agitated,” he says, “and I think you saw it on the actors’ faces. A couple of them didn’t make eye contact with me until the end of the second” evening.

“We shot my side the first night,” he continues, “and then they turned it around” so that director Greg Nicotero could get those anguished expressions from Andrew Lincoln (Rick), Steven Yeun (Glenn), Lauren Cohan (Maggie) & Co. as Morgan waved around Lucille. “We had six cameras rolling. It was quite a production.”

But considering the sequence was building to the brutal murder of a character that series creator Robert Kirkman hints is “beloved to everyone”, the to-do seems more than justified, necessary. Wouldn’t you agree?

What did you think of Negan’s debut? Weigh in below.