If Scott Alexander and Larry Karaszewski, the co-creators of The People v. O.J. Simpson: American Crime Story, ever decide to write a book on the art of running a show, we’d like to suggest they title it How to Craft a Compelling Season Finale… Even When Everyone Already Knows the Ending.

Although the FX drama has already earned its place on countless end-of-year Top 10 lists, given its provocative source material and superb cast, Tuesday’s final installment had the peculiar challenge of keeping viewers on the edge of their seats, when just about all of us already knew O.J. Simpson was found not guilty in 1995. Whether or not the creative team behind People v. O.J. succeeded is up to you, but first, a brief rundown of the episode’s events:

The 90-minute season ender begins by taking us through the tense closing arguments from both the defense and prosecution. And as the bulk of the trial comes to a close, Marcia Clark, Johnnie Cochran & Co. are at least looking forward to a few weeks’ vacation, assuming that the jury will need at least that long to determine whether Simpson is innocent or guilty. 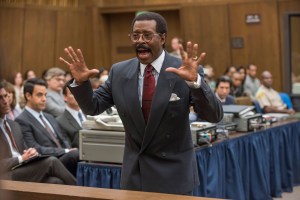 But, as with many things in the O.J. trial, the lawyers’ time off doesn’t pan out exactly as they’d planned.

After deliberating for just four hours — which included a lunch break, defense team member Barry Scheck notes — the 12 men and women deciding O.J.’s fate had turned their initial 10-2 tally into a unanimous decision for his acquittal. (And although the verdict is hardly a shocking plot point, the moments leading up to its announcement — from the court reporter’s slight flub while reading the defendant’s name, to O.J.’s nervous fidgeting under the table — are so tense, you might have forgotten altogether that you already knew the outcome.)

Throughout its 10-episode run, The People v. O.J. Simpson has had a responsibility to show the home audience those “classic” moments from O.J.’s legal battle, including the infamous Bronco chase and Cochran’s “If it doesn’t fit, you must acquit” line during closing arguments. But where the series has succeeded even more is in the quieter moments, the rare conversations and emotional breakdowns that cameras (somehow) didn’t catch.

Tuesday’s finale was arguably no different. Although O.J.’s innocent verdict is a highlight of the episode (made all the more fascinating by a montage of real-life news footage taken from the day he was pronounced not guilty), the more compelling scenes happen immediately after he is set free.

After wrapping an emotional press conference, Clark and Darden commiserate over their major loss and opt to simply get a drink; upon meeting Cochran in the courtroom hallway, Darden urges the defense attorney to understand that he has done nothing to help black people, despite O.J.’s acquittal; and moments later, Cochran allows himself a short, tearful celebration, as he realizes that the national conversation on race relations has gone as far up the chain as President Clinton.

And then there’s O.J. himself. Though he sheds a few tears in private, O.J.’s immediate reaction to the verdict is, “Let’s party!” But it isn’t until that evening, when his “rager” isn’t attended by a single close friend, that O.J. begins to see the effects of his year-long imbroglio. Realizing just how ostracized he’s become from society, O.J. chooses to step outside of his own Brentwood bash and give the backyard statue of himself a long, hard look.

Now that you’ve seen the verdict play out (again), it’s time to give us yours. Grade The People v. O.J. Simpson‘s finale in our poll below, then hit the comments with your thoughts on the season overall.