“A mother will do terrible things to protect her child,” pleaded Det. Harlee Santos’ former mother-in-law on Shades of Blue‘s Season 1 finale.

Little did Miguel’s mama know, but it would be that exact logic Harlee would employ when making the decision to snap the woman’s twisted, abusive son’s neck between her thighs in the episode’s final moments. I know that sounds like the exact opposite of feel-good television, but trust and believe that the grim execution was richly deserved. 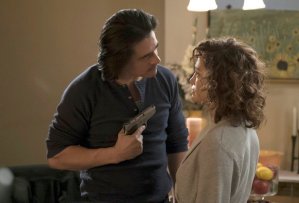 After all, Miguel had broken in to Harlee’s home with designs on raping her — and then he threatened to eventually do the same to their teenage daughter. Now that he’s dead, there’s at least one ray of light at the end of the Holland Tunnel — leading, of course, to Cristina, whom Harlee banished across the river (for her own safety) to live with her aunt in scenic Jersey City.

The “Harlee Kills Miguel” moment was just one of several big twists in the hour — which wrapped much of the action, but left enough gray space to provide a launching pad for Season 2.

In a nutshell, here’s how it played out:

* Backstabbing Donnie Pomp wound up with a knife in his torso when Loman killed him in self-defense. Wozniak helped the crew’s youngest member dispose of the Internal Affairs monster’s corpse — hopefully, dude wanted to be cremated — leading to the best one-liner in the hour. “He was a bad cop who did bad things and something bad happened to him,” Loman eulogized. “Amen.”

* As we learned last week, Harlee had made off with the FBI’s $12 million — but only because she planned to use it as leverage to get immunity for her entire crew. Unfortunately, with Donnie to ashes and Linklater (or whatever his name was) in the wind, “the only person you’ve got left to sell out is me,” Wozniak told Harlee. She tried to spare him from the truth that she’d been the mole all along, but her boss/father figure was one step ahead. 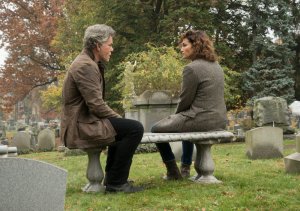 Turns out, Woz took off with the money — leaving a cool $200,000 for Cristina’s college fund — and then turned himself into the FBI with the remainder of the cash. “I don’t want to lose another daughter. I forgive you,” he told Harlee, over the phone. But the cameras cut away as Harlee went to tell Woz some unknown bit of intel that might help him stop the endlessly creepy Agent Stahl. Hello, Season 2 seed being planted!

* Did I mention Stahl slept with Agent Chen — then threw her under the bus for being emotionally unstable… the better to protect his own hide? I told you he was endlessly creepy!

* J.Lo’s real life beau Casper Smart showed up in a cameo as a Linklater courier not giving Woz the answers he wanted to hear. Lucky for him, it was a public meetup, so his character may live to scheme another day.

What did you think of the Shades of Blue finale? Grade it in our poll below, then share your thoughts in the comments!