With TV résumés that include Hannibal, Breaking Bad and True Detective, the three actors who lead Hulu’s The Path — Hugh Dancy, Aaron Paul and Michelle Monaghan — have plenty of experience playing messed-up characters.

And yet, the alter egos they portray on the streaming service’s newest drama might be even more morally ambiguous, emotionally complex and downright tormented than Will Graham, Jesse Pinkman and Maggie Hart. (And that’s really saying something.)

Created by Parenthood‘s Jessica Goldberg, The Path stars the trio as members of the Meyerist Movement, a cult-like organization that, for all intents and purposes, tries to help troubled souls — but, in many cases, does the exact opposite.

Dancy plays Cal Robertson, the charismatic leader of East Coast operations for the movement (and its interim figurehead, while founder Dr. Stephen Meyer wastes away from cancer in a Peruvian compound — not that the Meyerist members know he’s ill). When we first meet Cal, he seems kind enough — after all, his first order of business, when rescuing refugees from the wreckage of a New Hampshire tornado, is to save a new mother’s baby — but he also has deeply unsettling interactions with the Meyerist followers that indicate he’s power-hungry and not to be entirely trusted. (Look no further than Cal’s semi-sexual, semi-paternal relationship with new recruit Mary, which will likely break your heart and make your skin crawl all at the same time.) 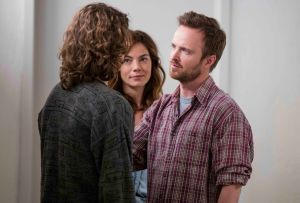 But The Path‘s primary focus is on Paul and Monaghan’s Eddie and Sarah Lane; she’s a lifelong Meyerist follower, and he’s still working his way up The Ladder, though a recent retreat in Peru has caused him to be massively skeptical of the movement. While Eddie was sky-high on hallucinogens and mourning the loss of his brother, he had a vision of the late sibling, who went all Ghost of Christmas Future and showed Eddie something rather disconcerting: the image of a comatose Dr. Meyer, hidden away somewhere in the compound, while a boa constrictor slithered across his body as he lay dying in bed.

Though Eddie can’t be sure if what he hallucinated is true, the incident is enough to make him go rogue. He begins investigating the potential lies that Meyerism is selling, and he travels to a motel room in the middle of the night to meet Alison, a fellow skeptic who believes she’ll be killed for trying to leave the movement. (According to Alison, they already killed her brother, which is a compelling-if-unsubstantiated argument.)

Unfortunately for Eddie, his trepidation about the movement begins to show, and Sarah starts to suspect that his guarded nature and middle-of-the-night rendezvous are all stemming from an affair that Eddie’s having with another woman. To save face, Eddie lies that he has been unfaithful, and he subjects himself to the movement’s Infidelity Rehab Program, a 14-day “course” that involves a lot of solitary confinement and highly emotional therapy sessions. Cheery!

By the end of The Path‘s two-hour debut, we only know a few things for certain, most notably that Dr. Meyer is nearing the end of his life, unbeknownst to the Meyerist congregants. But Wednesday’s premiere introduced a whole lot of questions about the movement and the people who follow it — and it’s those open-ended storylines that make The Path all the more intriguing.

What did you think of The Path‘s first two installments? Grade the debut in our poll below, then hit the comments to elaborate on your choice!