Empire‘s spring premiere was defined even more by what Hakeem Lyon didn’t do than in the bold moves he made throughout the hour.

The youngest member of the hip-hop dynasty — last seen waaay back in December’s winter finale voting to oust his father Lucious as Empire Entertainment CEO — rejected his twisted dad’s invitation to shoot him at point-blank range and walked off into the night at the end of Wednesday’s hour. That wouldn’t have been quite so dramatic had Lucious not vowed to end Hakeem’s life the next time their paths crossed. “Watch your back, baby boy,” hissed Terrence Howard’s alter ego. “I keep my promises.”

Oh, Lucious’ confession to executing Bunkie – on the same exact spot — made the moment all the more chilling. (Was Lucious disappointed when Hakeem didn’t pull the trigger? Yikes!) 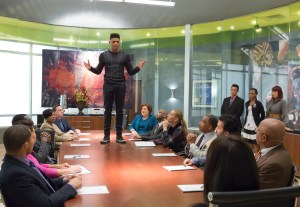 Lucious’ rage reached its boiling point when — despite his henchmen’s violent and very effective threats to the Empire board of directors about nominating any new candidates as CEO — Hakeem leapt onto the company’s conference-room table and declared himself the heir apparent.

His first day on the job, however, found him butting heads with his scheming former lover/main Empire shareholder Camilla. Remember Cookie and Lucious’ wager over the epic Hakeem-Freda Gatz rap, which resulted in Empire and Cookie’s Lyon Dynasty producing Jamal’s next album as a joint venture? Cookie would only agree to let Empire release its No. 1 artist’s CD if Empire bought out her label — but also allowed it to exist as an autonomous entity under its umbrella.

Fret not, though, Cookie’s endgame isn’t playing tambourine for “Yoko Ho-No.” She’s planning to destroy Camilla from inside the company, she promised Lucious, Jamal and Andre — and oh, it’ll be a long, hilarious, insult-filled trip getting there.

The episode’s other big arc centered on the fate of Rhonda (she survived the fall finale’s horrifying push down her mansion’s epic staircase) and her unborn baby (who did not). A devastated Andre ended the hour praying to God to help him, but Rhonda renounced any faith in a higher power — seeing how her prayers as she lay bleeding in her foyer (to let her baby live, even if she died 1,000 times) went unanswered.

When Rhonda returned home from the hospital, though, she seemed to experience a flash of memory indicating her terrible tumble was something more ominous than an accident. (We also got to see a glimpse of the perpetrator exiting — and wearing a red-bottomed heel. Anika, is that you? #TooObvi, folks!) 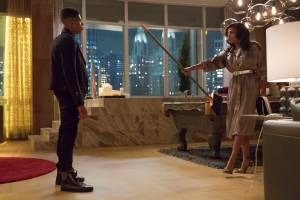 In other news: Cookie whalloped Hakeem with a broom and her purse in the wake of his Empire board vote; Cookie and Lucious got cuddlier/flirtier than they have in many moons as she comforted him over his ouster/tried to convince him not to kill their youngest; Hakeem dumped Laura as a condition of Camilla making him CEO, but the breakup didn’t stick — they reunited and had sex for the first time; Laura cut a white-hot new jam (where the other Mirage a Trois gals at?); Jamal also recorded a nifty new jam, “Freedom,” which doubled as a memo to his rich benefactor/American Sound Award booster Jameson that he was still gay and proud – but unwilling to let that dictate that he couldn’t occasionally take a swim in Lake Ladylovin’. Sexual fluidity, yo!

Below, executive producer Ilene Chaiken weighs in on what’s ahead for Rhonda and Andre, Cookie and Lucious and a character whose journey might come to an end in the Season 2 finale.

TVLINE | How will losing their baby affect Andre and Rhonda’s marriage?
It is a turning point. Any couple that goes through such a tragic event is going to face challenges. We explore that between Rhonda and Andre in some detail. It’s not a simple, straightforward, melodramatic story. It’s a story about character. It’s a story about coping.

TVLINE | Is Andre’s bipolar disorder going to become a larger part of that story?
It’s always an issue for him. It doesn’t necessarily mean that he’s going to have a bipolar break, but he’s going to face those challenges and he’s going to be in a tenuous situation, in a tenuous relationship to his own mental health, and with his family constantly vigilant and expecting the worst from him.

TVLINE | Lucious and Cookie were there for each other in really supportive ways this week — complete with Cookie slapping Lucious’ booty. Will that romance be rekindled?
I won’t say whether or not the romance will be rekindled, but I’ll say that the relationship between Lucious and Cookie is one of the deepest relationships on this show or any show, as far as I’m concerned. There’s so much between them, it will never go away. They’ll always be drawn to one another. They’ll always flirt with the possibility of what could have been — and whether it can be again. And if either of them is ever on the brink of finding love somewhere else, you know that the other one is going to swoop in and ruin it. 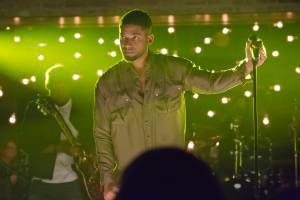 TVLINE | What’s in store for Jamal?
Jamal is, firstly, on a journey to stardom and grappling with what that means, with what it means to his artist’s soul and his music. And also possibly more important to the drama of our show, Lucious and Jamal are suddenly pitted against one another again [for an ASA statuette], and that sets off a chain of events between Lucious and Jamal which you even got a hint of in [the winter finale]. Lucious is competitive. He does not want to be surpassed by any of his children, as much as he says he loves them and wants the best for them. He’s capable of all kinds of treachery to make sure that doesn’t happen

TVLINE | Give us your best season finale teaser.
We have a huge season cliffhanger… Let’s just say that someone might not be coming back to Empire at the end of the season.
—Reporting by Vlada Gelman

What did you think of Empire‘s spring premiere? Grade it in our poll below, then sound off in the comments!