This week on Arrow, Oliver’s genius love/tech support is gone from the team. But luckily, there’s another terrific gadget wiz available to step in just as things start getting bzzzzy for the crimefighters.

Post-breakup, Oliver is taking out his frustrations through grueling training sessions, and Thea, Laurel and Dig are feeling the brunt of his pain. Laurel tiptoes around their brokenhearted friend, only saying that “someone” told her Palmer Tech is hiring a new head of PR. Felicity is “not Voldemort, and I’m fine,” Oliver responds, before encouraging Thea to tell Alex about the job. (Oliver’s not re-entering the mayoral race – voters hate flip-flopping, he argues – so Alex is interviewing with Darhk’s wife!)

Meanwhile, Felicity is trying to find a way to make her miracle implant accessible to the masses. Despite the hefty price tag, there’s someone who wants the tech: her Flash nemesis Brie Larvan, aka the Bug-Eyed Bandit. She unleashes her robotic bees on Felicity – and Thea and Donna, who are visiting PT – prompting Curtis to go in search of the Green Arrow. Oliver has grumpy face when Curtis just walks right into their base of operations, but seeing as how they could use his computer expertise, he lets Curtis pitch in.

Oliver, Laurel and Dig battle Brie’s buzzy friends, while Felicity, Donna and Thea put up a good effort, too, at Palmer Tech. Felicity busts through a wall and sends the kidnapped board members down to the panic room. (After the secret elevator, explosions and Green Arrow’s appearance, Donna has to be on to her daughter’s former night job, right?) Brie reveals that she has a tumor, so Felicity hands over the specs. All good now, yes? Nope, Brie returns with a vengeance after figuring out that Felicity is the hacker who sent her to prison. 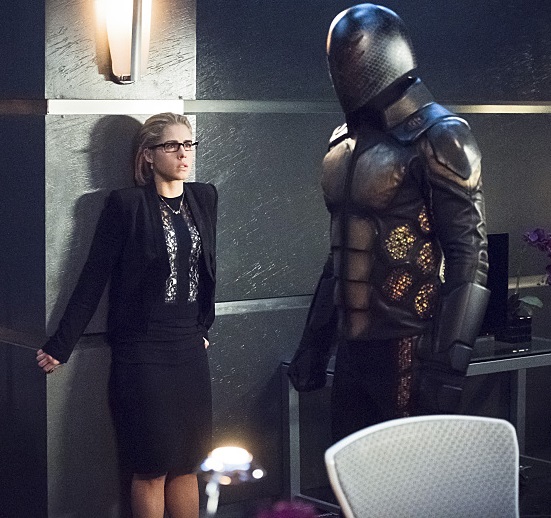 Green Arrow – recovered from the bee that was replicating itself inside him – shows up with a dart outfitted by Curtis to unleash a virus. But it’s ultimately Felicity who defeats the bee-man by electrocuting him as Curtis hacks the buggers and takes down Brie. This kind of hero life is not for the champs, though. Felicity tells Thea she’s sick of the fighting and violence. She became part of the team to make a difference — and she can do that by turning Palmer Tech into a beacon of hope. As for Curtis, he earns Oliver’s respect, but doesn’t seem to want a permanent position on Team Arrow. “I saw enough to know that this is where I belong,” he says to his husband at home.

On the Big Bad front, Malcolm informs Damien Darhk that H.I.V.E. is moving forward with Genesis, but they’re leaving him behind in jail. Later, Malcolm meets with Darhk’s “ace in the hole” – Dig’s brother, Andy!

In the flashbacks: Reiter is killing people to gain power via their life essence. He also says his storyline could have been condensed to one episode. (Wink-wink. Just making sure you were paying attention on that last part.)

Arrow fans, what did you think of “Beacon of Hope”? Did you enjoy seeing the team splintered into two halves as they fought a common enemy?