This week on The CW’s The Flash, Barry traveled back in time to get a crash course from the old “Dr. Wells” — but what he also came back with helped a loved one’s future.

While this was a plenty entertaining episode, in a Back to the Future sort of way, I sit here afterward thinking that in the end, not very much happened. Which isn’t a horrible thing. Maybe the show is simply so good with those last-minute “stings” that when it doesn’t deliver one, there’s an emptiness.

With everyone (Joe included) beating themselves up over the Zoom/Jay Garrick reveal, Barry is committed more than ever to upping his speed. But, Caitlin asks, “What if you just can’t?,” after they realize that Zoom and Reverse-Flash before him ran faster because their feet made less contact with the ground. Dinner with the Wests proves fruitful, though, when Wally gives Barry the idea to pick the brain of a dead man — as in the old Dr. Wells (aka Eobard Thawne).

Defying Harry’s many warnings but with plenty of coaching from Cicsco and Caitlin on when and who he’ll be running into, Barry travels back to the team’s first clash with the Pied Piper. After KOing himself with a tranq art, Barry goes to S.T.A.R. Labs and nudges Wells to help him out with a speed equation. Wells obviously senses something is up, especially when a speedster-hating Time Wraith surfaces in Central City. Wells then KOs our Barry and locks him up, asking what his game is. At first, Wells/Thawne fears that if Barry is alive in the future, then his plan fails, so he must re-calibrate. But Barry lies that Eobard is successful in getting back to his time — “You won.” Barry just needs more speed in order to stop the singularity that was created. Evil Eobard points out that he doesn’t need this Barry and goes in for the kill, but Barry bluffs that he left a hidden letter for his other self to find, revealing all of Eobard’s secrets. Smart boy. 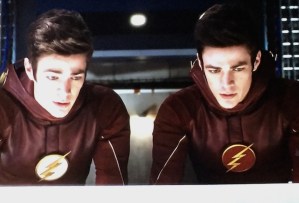 Time Wraith storms S.T.A.R. Labs (only to get briefly fended off by the Pied Piper’s gauntlet tech), the other Barry comes to and shows up — face to face with his slightly older self, and leaving Cisco’s jaw on the floor. After some quarrelling over who the “real” Barry is, Wells steps in to spin a version of the truth that sates everyone’s curiosity. Wells then takes our Barry aside to give him the info he needs on the speed equation. (But before going, Barry whispers into Cisco’s ear about Hartley knowing where Ronnie is.)

With help from his other self, Barry zips back into the time tunnel and brings the Wraith with him. Upon plopping back in S.T.A.R. Labs with the spectre in tow, Barry barks at Cisco to use the tech he developed to stop it in the past, but it doesn’t quite work, Luckily, Hartley himself is there to zap the spook away, before heading off to dinner with his parents. Barry then cues up the flash drive from Wells, which is, as promised, loaded with speed force data.

But afterward, Barry reveals something else he brought back with him — the video he asked a still-alive Eddie to record, allegedly for Iris’ birthday video. In it, Eddie gushes about his love’s “fearless, independent, loving and kind” ways, calling every day they were together “a gift.” He then says what Barry sensed Iris needs to hear now, that “you deserve to be happy for the rest of your life,” as tears stream down her and our faces.

What did you think of the episode “Flash Back”?