During Monday’s season finale of The Fosters, a long hidden secret about two characters is revealed — but is it good or bad for the Freeform drama?

Callie discovers that Justina works for the company involved in placing Jack in the foster home where he was killed. At a party, Callie outs her mentor in front of the entire crowd and renounces the privatization reform bill. An angry Justina retaliates by making public the restraining order Lena and Stef took out to prevent Brandon from seeing Callie. That leads a TV reporter to confront Callie on school grounds and ask whether the allegations that she had sex with her foster brother are true. The moms, of course, vow to sue Justina, but a tearful Callie tells them they can’t “because it’s true.” 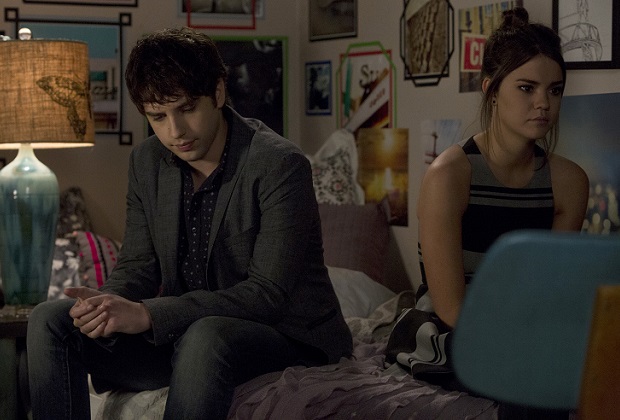 Since the show’s start, fan response to the Brandon/Callie romantic relationship has been divisive, especially in all the back-and-forth on the pair’s status. Both characters seemed to be moving on this season — him with his new single-mom love interest, her with AJ — so is this yet another setback? Or could the truth about Callie and Brandon’s night of passion, which has been hanging over the drama like a specter, be the thing that finally sets them and the storytelling free? Isn’t it better that it’s out in the open, at last?

* After witnessing Mariana and Mat kiss, Nick takes the most extreme reaction route: First, he burns down R&J‘s sets, and then he pulls a gun out of his car’s glove compartment. (They’re not back together, Nick!)

* Jack’s death causes Jude to question his sexuality. As far as he sees it, maybe God doesn’t want him to be gay since he took away the only two boys he’s ever kissed. Callie tells him that Jack wasn’t gay, so God isn’t trying to punish him. But Jude doesn’t believe his sister, because she lies about a lot of things.

* Gabe could be in big trouble with the law, since Jesus told his probation officer that his dad helped build sets for R&J. On a related note, while the school board sides with Monte against the lying student, they also discover Lena allowed a registered sex offender to work on a school play.

* Brandon hooks up his new girlfriend with a sweet pad by using his Juilliard money for the deposit. It doesn’t matter because he needs financial aid to attend the school, he argues, but it will make a difference to her and her son. Kind or stupid?