Criminal Minds welcomes back one beloved face on the heels of bidding adieu to another, when Paget Brewster guest-stars on Wednesday’s episode (CBS, 9/8c).

Setting the stage for the fan favorite’s latest encore: Interpol agent Emily Prentiss reunites with her BAU buds when evidence indicates that a serial killer she has been steadfastly tracking overseas has set up shop Stateside.

“She has been dealing with a copycat killer that she came really close to catching in London, where he was copying Jack the Ripper,” showrunner Erica Messer previews. “She was kind of having nightmares about this guy and the fact that he eluded her, so she has been on high alert to see where he pops up next, because he has a very clear killing pattern.” Once it becomes evident that said slayer has now landed on the BAU’s radar, Prentiss says to her old pals, “I would love to come help you catch this guy.”

Messer and the Criminal Minds team had been angling to bring Brewster back for a while now. Having last reprised her role as Prentiss in February 2014 (for the series’ 200th episode), the  actress was eyeballed to help fill the void when A.J. Cook went on maternity leave last summer. But when Fox ordered the sitcom Grandfathered to series, Brewster sadly became unavailable.

Now that Grandfathered has wrapped production on its freshman run, “I’m so excited that we get her finally,” Messer effuses. “And the timing couldn’t have been more perfect,” given that longtime team member Derek Morgan just delivered a round of sad goodbyes, 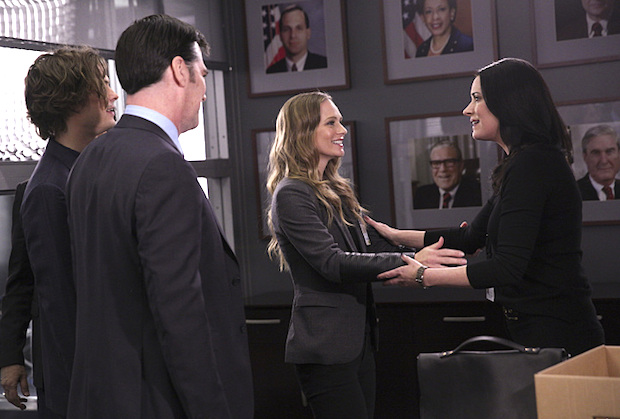 after deciding to quit the FBI and be a family man. “We really wanted to do something big after Shemar [Moore] left,” says the EP, “and there’s nothing greater than bringing back our sweet Emily Prentiss.”

In fact, especially when compared to her previous visit, “It’s more Prentiss than we’ve had in years, which is nice,” Messer reports. “Paget was adorable at first, like, ‘Is there too much Prentiss in this story?’ I was like, ‘Nooo, there is no such thing!’ So yeah, we were thrilled to have her back.”

Similarly for Hotch, Reid, Garcia and Rossi, their colleague’s return serves as “a happy distraction” as they begin to learn what a Morgan-less team looks like. Says Messer, “She’s sort of delicate about it at first, but then it becomes the ‘elephant in the room’ that they talk about,” benefitting from the BAU alum’s highly qualified perspective. “She can look at it from what Morgan must be feeling right now, because she was once Morgan. She decided to walk away, so she knows what that is. We tried to bring all of that to life.”

Watch an exclusive sneak peek, then read on for more:

All told, “By the end of the episode, it’s a lovely look at ‘Here’s what happens when an old friend comes back.’ It’s laughs and a lot of love,” Messer states, before adding the Criminal caveat: “Killing aside, it’s a feel-good episode.”