A half dozen characters dropped “Yep, we’re headed for a series finale” bombshells on this week’s The Good Wife, but none landed louder than Alicia Florrick’s barely audible inhalation in the episode’s last second.

Cary’s quitting —and perhaps heading to parts decidedly more tropical. Eli’s pleading guilty. David Lee’s selling out. Diane’s putting the finishing touches on a power play. Howard Lyman is pulling up his pants. And Peter’s begging for a favor.

But our protagonist, she’s not only asking for a divorce, but (if you’ll allow me to paraphrase a Stevie Wonder lyric) she’s got her soon-to-be ex’s future in her hands.

Was this the best hour of this interesting, scattered, and only intermittently satisfying farewell season? I’d say, “Hell yeah!”

Alicia’s “I want a divorce” was quite possibly the most long overdue TV moment since Maddie and David lustily crashed through a glass table on Moonlighting. And Cary’s decision to go his own way — and stop looking over his shoulder — had me whooping with delight, too. Matt Czuchry’s been underused for the last 20 episodes or so, but he knows how to make an exit, no*? (*not necessarily a reference to his enviable backside)

As you contemplate where Episode 18 ranks in the Season 7 pecking order, allow me to recap the action. 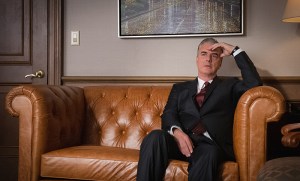 PETER MAKES A BOO-BOO | Peter pops up unannounced at Alicia’s apartment, finds Jason chilling in his boxers and suddenly remembers, “Oh, I’m married!” I love how Jason doesn’t even flinch when the Illinois governor knocks his coffee cup across the room. It’s almost as good as his response to Peter’s threat of an ass-kicking (“You could try — and then what?”). When Alicia finally learns about the cockfight (pun definitely intended), she busts into Peter’s crowded office, ignores the fact that they’re being overheard and says the four words we’ve been waiting to hear for eons — “I want a divorce.” Peter brings Grace into the conversation,

“I saw him yesterday, walking around in his boxer shorts — acting like he owned the place,” Peter huffs, and Alicia clearly has Destiny’s Child’s “Independent Women” playing in her head, because she’s all, “Yes, because I own the place — and I told him he was welcome to walk around naked if he wants.” Even a “What about Grace?” question meets with Alicia’s “no f–ks given” disdain, as she tells her husband, “You can get custody in the three weeks before she goes to college!”

In the end, though, Peter comes to Alicia repentant, and asking for one more favor: Will she stay with him — at least publicly — until U.S. Attorney Connor Fox’s case against him is finished? After all, if she leaves him at the exact moment he’s indicted, it’ll make him look doubly guilty, he says. And as Alicia inhales — ready to answer the question — we cut to the credits. Looks like a decision for Episode 19, suckers!

AIN’T NO CARY GOT TIME FOR THAT | David Lee decides to milk to firm for all it’s worth rather than fight against Diane’s sort-of-secret, all-female-named-partners plan — siding with La Lockhart and agreeing to make Alicia a named partner again. (Howard Lyman gets screwed out of his office in the process — but of all the beloved characters we’re saying goodbye to, I’ll miss him least of all.) Cary, who can’t convince Alicia to be anything more than Switzerland in this war, and actually has to put up with Howard’s verbal slaps (ugh), tells her he’s quitting. “By the way, I was subpoenaed in your husband’s case,” he tells his onetime partner in crime as he turns and walks away. “It’s not good.” Oooooh, Cary, way to drop the mic! As Adele once said to her ex, I wish nothing but the best for him — as long as he doesn’t go to work with Louis Canning! 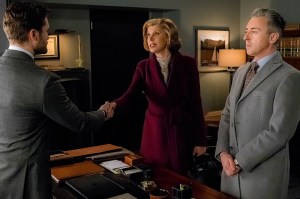 ELI’S CHOICE | Eli learns that Connor Fox was tapping Marissa’s phone — since she worked for Lloyd Garber, the Florrick donor at the heart of the U.S. Attorney’s grand jury situation. He overheard Eli’s admission to tipping off Judge Schakowsky — and presents Eli with a hideous dilemma: Watch as Marissa is forced to testify against him — or else he can shift alliances and testify against Peter. Marissa asks an interesting question: Is Eli protecting Peter because he thinks his boss is innocent, or is he doing it out of some misplaced loyalty? Eli hires Diane, though, and their strategy at least temporarily flummoxes Mr. Fox: He’s willing to confess to obstruction of justice in the Schakowsky case —and do jail time — but it’ll make him an unreliable witness if his memories of Peter’s misdeeds conveniently happen to become less cloudy. Will Connor take the bait? I don’t like his chances against an out-for-blood Diane.

CAITLIN RETURNS | The case of the week finds Alicia and Diane — on a mission for Reese Dipple — up against Alicia’s onetime protege Caitlin D’Arcy, who’s back practicing law (but sadly separated from her husband) now that her daughter’s old enough for nursery school. It’s the kind of “legal gray area” case that no other network drama explores so entertainingly, yet given Caitlin’s kick-ass performance in beating her former bosses, you have to wonder if she’ll be joining Diane and Alicia and Lucca and all the legal ladies before the series comes to its conclusion.

What did you think of this week’s Good Wife? Were you stoked to hear Alicia ask for a divorce? And what do you want to see her do regarding Peter’s final request? Hit the comments with your thoughts!