It’s the Abbies’ world and we just live in it — so learns Jason Patric’s character as Fox returns to Wayward Pines this spring.

Premiering Wednesday, May 25 at 9/8c, the 10-episode Season 2 picks up after the events of Season 1, with the residents battling the First Generation’s brat pack. Dr. Theo Yedlin (The Lost Boys‘ Patric) finds himself in the middle of a rebellion, as he tries to understand what Wayward Pines really is and help preserve the endangered human race. 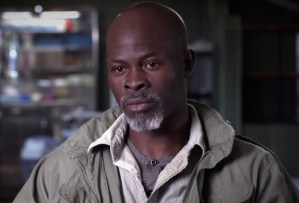 Two-time Academy Award nominee Djimon Hounsou plays C.J. Mitchum, a town historian who can provide a unique bridge between the current world of Wayward Pines and the previous world that humans inhabited.