Ambiguity may not be the end goal of most religions, but it’s the cornerstone of Hulu’s new drama series The Path, a meditative examination of a fast-growing cult (or is it merely a movement?) and its ambitious, sometimes menacing leader.

Hannibal‘s Hugh Dancy stars as Cal Robertson, head of East Coast operations for the Meyerist Movement and heir apparent to its founder Stephen Meyer, who is secretly/rapidly dying of untreatable cancer in a compound in Peru.

Cal’s optimistic speeches about achieving world peace — one troubled soul at a time — and his outreach to disaster victims, drug addicts and all manner of troubled souls seems admirable enough, but Dancy is especially artful at keeping a low-grade darkness beneath the surface of his character’s carefully constructed and relentlessly zen facade. In one especially creepy scene, Cal listens to a self-help CD in his car, pulling down the mirror to practice the art of using his eyes to convey seriousness, amusement, even empathy — and it leaves you wondering if somewhere in his basement, there’s a pit containing a terrified woman, a fluffy white dog and a bottle of lotion. 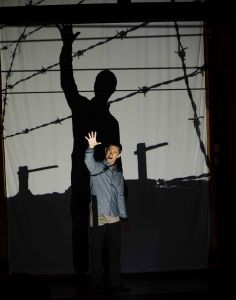 That sinking feeling pervades The Path thanks to the fact that Cal (and factions of the Meyerist movement in general) aren’t averse to head-against-the-microwave street justice, some light kidnapping/imprisonment of wayward members and possibly the staged suicides of those considering a switch to, say, that nice Episcopal church down about a half-mile down the road. (Cal’s deeply icky relationship with a new recruit named Mary, who looks to Meyerism to help her grapple with her unspeakable experiences with childhood sexual abuse, will drop said sinking feelings right to the bottom of the ocean.)

Our entry into The Path, however, comes via Aaron Paul’s Eddie, a mid-level player in Meyerism who’s married to one of its ranking members, an interesting juxtaposition of personality traits named Sarah (True Detective‘s Michelle Monaghan) — who back in the day was romantically torn between Eddie and Cal, and is now one of the key advisors to the latter.

When we meet Eddie, he’s just come back from a hallucinogenic-fueled field trip in Peru — Meyerists like their doobies as much as they disdain meat products and current pop culture — one that prompted a vision of his late older brother beckoning him into a room where Dr. Meyer lay comatose with a yellow boa constrictor slithering up his body. Now, Eddie’s not so sure about what he saw (or didn’t), but his questions about the health/healthiness of Meyer, the Meyerist movement and the entire life he’s built within the organization’s upstate New York settlement continue to nag him.

Eddie’s crisis of faith leads him to act like a man who’s in the midst of an affair, and after Sarah follows him to a late-night hotel rendezvous — a wonderfully paranoid moment punctuated by a strident score that’s reminiscent of a triggered security alarm — we find he’d rather make up a story about a tryst with comely cult member Miranda (Minka Kelly) than admit to meeting with an erstwhile Meyerist who claims cult wrongdoing. (Alcatraz‘s Sarah Jones, as Eddie’s new frenemy, is wonderfully paranoid — which doesn’t mean Cal and his followers aren’t out to get her). 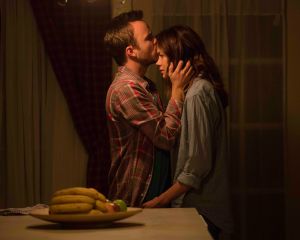 While there are underpinnings of menace laced into nearly every aspect of the outwardly benign Meyerist movement — Sarah’s pronouncement about energy and light and unburdening one’s secrets is kind of appealing, until she’s pushing Eddie into 14 days of imprisonment and psychological abuse (aka the Infidelity Rehab Program) — creator Jessica Goldberg (Parenthood, Camp) and executive producer Jason Katims (Parenthood, Friday Night Lights) don’t seem all that interested in making The Path a pulse-pounding drama about Eddie’s escape from cult life.

Instead, they focus on what draws lost souls into a collective, how the need for power and control can corrupt even the most tranquil groups and why — as Kathleen Turner, playing Cal’s ferocious alcoholic mother, notes in Episode 3 — “wanting to be someone else never works.”

Where The Path sometimes loses its way is in its deeply deliberate — some might say pokey — pacing and its failure to clearly define the central cult beyond an organic, new-agey, Scientology-adjacent, slightly mystical vibe. (For all the ancillary folks who crop up in each episode, you could argue that Meyerism remains the most sketchily defined character of all… although I have to admit its eye-inside-a-machine-gear symbol is both pretty and pretty ominous.)

There are also moments you’ll find yourself wishing Goldberg and Katims had trimmed away some of the less vital elements of their dense tale and cleared a path toward higher stakes and greater suspense. In Episode 4, when Eddie and Sarah leap fully clothed into a pond in the midst of a crisp, autumn afternoon, it sticks out like a clichéd thumb, as does a subplot in which Prison Break‘s Rockmond Dunbar shows up as the requisite FBI Agent With Questions.

Still, The Path benefits greatly from the way it takes us into a murky world and repeatedly makes us question how we feel about its protagonists. Cal isn’t only a dangerous egomaniac and an opportunist, he’s also a true-believer who’s overcome a difficult past and now wants to spread the good word to a bigger audience. Sarah’s not just all the way up on Rung 8, peering down at those beneath her, she’s also a wife and mother who’s scared of losing everything she holds dear — and she’s actually self-aware enough to verbalize it. Eddie, for his part, may be on the brink of true clarity, but does he really want the truth at the cost of his happy home?

Buoyed by Dancy’s magnetism, Monaghan’s versatility and Paul’s intensity, The Path may not turn you into a complete convert, but it’ll be hard for you not to at least feel its pull.

The TVLine Bottom Line: The Path is good, but falls just short of being sect-tacular.