Shameless‘ Fiona has had no shortage of love interests during the Showtime series’ six-year run.

Even Fi, herself, recently recognized she has a problematic romantic M.O., confessing to fiancé Sean, “I jump from relationship to relationship without ever catching my breath, which is why my life is such a f–kin’ mess.”

Perhaps it’s time for the gal to take a breather from men and dating? Her portrayer Emmy Rossum, who believes her character was speaking the truth in that moment, is all for the idea.

“I keep saying to our producers, ‘Why is she never single?'” the actress tells TVLine. “I say every single season, ‘Why do we keep putting her with these guys? Can’t we have four episodes where she’s single?’ Women are single! They don’t just bridge from one guy to another. Some girls do, and Fiona does, but I would love to see her struggle with nobody.”

It’s a storyline that the writers “absolutely have considered,” executive producer Krista Vernoff says. “We talk about it a lot.” But the EP admits, “We have just found, probably selfishly as writers, that there’s great material in Fiona’s relationships. Also, there’s a lot of women in our writers’ room and none of us took breaks from dating in our early twenties. We didn’t [think], ‘Maybe I should spend some time alone,’ until we were older than Fiona.”

Plus, the eldest Gallagher’s self-destructive pattern isn’t without reasonable justification. “She is a damaged woman who comes from damaging parents,” Vernoff explains. “When your father is Frank…you want a different experience of male love, and so, she looks for that. Often, she ends up attracting different versions of Frank, which is some of what we were playing with in the reveal of Sean being a drug user.” 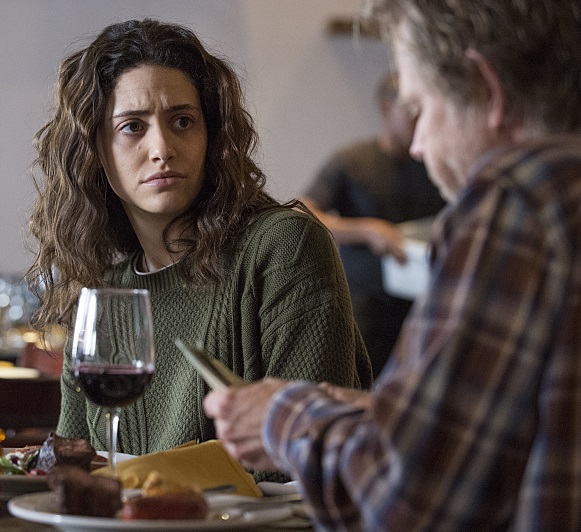 Adds Rossum: “It’s true – having not had a father, she is needy for that constant physical touch. I understand that need and that fear of being alone. She has a huge abandonment issue, too. So I can understand where [her behavior is] coming from. [Wanting her to be single is] my wishing that her wounds were more healed than they are.”

In the meantime, Fiona is moving forward with her second wedding, determined to make this union a success. So what makes Sean the right guy for her to marry?

“I don’t know that we know that he is,” Rossum replies ominously before adding with a laugh, “TBD.”

“There have been some red flags, and she is operating [with the idea that] if she pretends everything is normal, then it’s normal,” the actress continues. “I think she’s going to get a pretty rude awakening.”

As her big day approaches, Fiona will also get a surprise courtesy of the absentee dad who gifted her with so many issues.

“[This Sunday’s episode] is particularly interesting because of how the dynamic between Fiona and Frank flips on its head,” Rossum previews. “We see, for the first time, Frank is quite interested in parenting, being part of the wedding. For what reason, we’re not really sure. Fiona finds herself really wanting to lean into that affection and not trusting it.”