Despite new threats from a very familiar-looking troublemaker, Liza’s secret remains safe after Wednesday’s Younger season finale. Her love life, however, is another story.

TVLine spoke with stars Sutton Foster and Hilary Duff about the finale’s biggest twists, but first, a quick recap:

Thad’s identical twin Chad — whom Duff describes as a “granola version” of Kelsey’s fiancé — uncovered security footage from his brother’s death, forcing Liza to tell Kelsey about his infidelity, a confession that did not go over well. Their subsequent argument prompted Liza to leave Empirical for a job at the Paramus Park Mall, though it didn’t take long for Charles (and his lips!) to convince her to return. On top of all that, Liza and Josh’s post-funeral hookup inspired him to dump Greta and hop back on the Miller Express.

So, what’s next for the Younger gang in Season 3? Let’s go straight to the source(s) to find out: 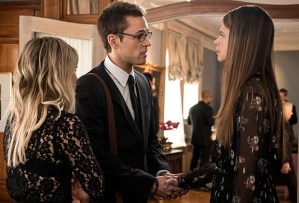 KELSEY & CHAD?! | If you raised your eyebrow when Chad kissed Kelsey on the mouth, allow me (and Duff) to congratulate you on your keen observational skills. “I don’t know what’s happening in Season 3, but I’m sure there’s going to be a hookup,” Duff tells TVLine. “I don’t think it’s going to last very long, but I think Kelsey is going to make some weird choices while she’s grieving — and Chad is going to be one of them. He’s also going to be a threat to Liza for a while, as long as he has that computer.” As for Kelsey’s post-Chad plans, Duff says, “I kind of think she should go on a little bit of a rampage, a bit of a tear.”

LIZA & CHARLES! | Before we dive into the Josh vs. Charles debate, here’s some intel from Foster on Liza’s big kiss with her boss: “[Darren Star had] pretty much mapped out the whole season by the time we went into the production, except for the finale. That episode actually changed, and Darren was still writing it kind of late in the game. For example, the scene where Charles comes to the department store was added after the table read. It played out a little differently initially, but then [the writers] were like, ‘Nope, Charles has to be the one to go get her.’ Peter [Hermann] and I were like, ‘Here it comes! Here comes Liza and Charles!'” 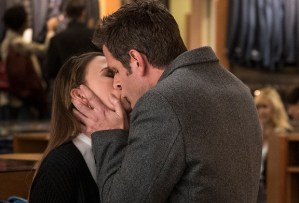 CHARLES VS. JOSH!!! | Season 3 will also find Liza having to choose between what was with Josh and what could be with Charles, a decision Foster is glad she doesn’t have to make herself. “It’s definitely a slippery slope, but there’s something real happening between Liza and Charles,” she says, adding, “but Liza also isn’t done with her relationship with Josh. I think Liza needs to explore that first.” Duff offers similar sentiments: “It makes the most sense for her to eventually end up with Charles, but I love what Josh brings out in Liza. He’s a really great guy, and he loves her, so it’s a tough call.”

Where do you stand on the all-important Josh/Charles debate? Do you second Duff’s theory that Kelsey is headed for a rebound with Chad? And what else are you looking forward to seeing in Season 3? Grade the finale below, then drop a comment with all of your thoughts.