There’s an implicit promise built in to ABC’s #TGIT programming block: You bring the popcorn and the red wine, and megaproducer Shonda Rhimes and her team of writers will show up with wicked, sexy, you-didn’t-see-it-coming twists. You’ll gasp, you’ll (occasionally) cry and (if you can focus on more than one screen at a time) you’ll watch your Facebook and Twitter feeds blow up with your friends’ and co-workers’ color commentary.

Which is why it’s quite disconcerting that there’s not a single significant zig or zag in the pilot episode of The Catch — which slips into How to Get Away With Murder‘s timeslot this Thursday (at 10/9c) — that hasn’t been implicitly spelled out in the network’s omnipresent ad campaign. 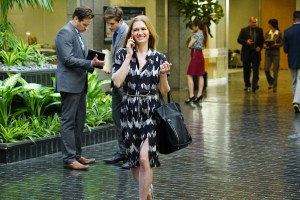 Alice Vaughan (The Killing‘s Mireille Enos) is a Los Angeles-based private investigator and corporate security expert who falls victim to a long con by her fiancé (Parenthood‘s Peter Krause). It turns out he targeted her in the hopes of getting inside intel about her big money clients — and her $1.4 million in life savings, to boot.

And… well, that’s pretty much the crux of the pilot episode (future installments of The Catch were, alas, not screened for critics). Oh, sure, the hour includes some nifty split-screen touches from director Julie Ann Robinson (Grey’s Anatomy, Suburgatory) — and an enigmatic sexiness from Krause’s duplicitous grifter — but ultimately, it fails to be anything more than a slickly filmed, appealingly casted collection of plot points telegraphed so far in advance, even Mr. Magoo could spot ’em.

It doesn’t help that while the pilot is peppered with mentions of Alice’s stellar professional reputation and in-the-field prowess, she gets repeatedly outwitted and outplayed in ways that would have fellow Shondaland residents like Olivia Pope and Annalise Keating scornfully Tweeting “#smdh.”

Early in the hour, the team’s white whale Mr. X (it spoils absolutely nothing when I tell you he turns out to be Krause’s character) uses a car alarm, a dog leash and a group of school children to thwart their attempt to catch him in the midst of snatching an ill-gotten hard drive in broad daylight — despite him sending them a warning email (“Are you ready to play?”) in the run-up to his misdeeds. 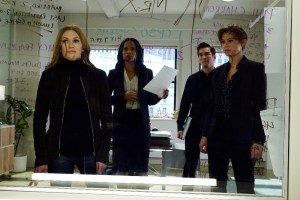 When the other wing-tip shoe finally drops and Alice learns “Christopher” has duped her, Enos limits her character’s emotional response to a few gasps, one slide down an office whiteboard* and the fluttering of her distractingly large false eyelashes. Perhaps this is meant to signal Alice’s steely shift into hunter-mode, but a smashed glass or a howl of fury or a quick burst of tears might’ve helped to draw the audience into her plight. (*Actually, it’s a clear board, because I guess even though it’s not really practical, it’s pretty.)

There are a few seeds planted in the course of the hour that have the potential to sprout in interesting directions: The conflict painted across Krause’s face makes plain his conman’s genuine feelings for Alice, while the implication that his boss/lover Margot (Lost‘s Sonya Walger) might be capable of having him killed for such a misstep adds a needed touch of menace to the proceedings. And Bosch‘s Rose Rollins, as Alice’s business partner Valerie, brings keen-eyed specificity to her not-particularly-defined role of BFF/moral compass.

Of course, it’s worth noting The Catch underwent some serious behind-the-scenes upheaval after it was ordered to series — most notably, Damon Dayoub (NCIS) and Bethany Joy Lenz (One Tree Hill) being replaced by Krause and Walger, and creator Jennifer Schurr exiting as showrunner — so it’s not out of the question that subsequent installments could travel to funkier, less expected places.

Whether or not the Shondaland faithful should bother sticking around for such uncertain rewards, well, that’s the catch of The Catch.

The TVLine Bottom Line: Despite the presence of Krause, Enos and Walger — all of whom have been standouts in modern TV classics — The Catch is barely worth investigating.