The future of NBC’s Heartbeat likely depends on how viewers respond to the “look at me!” opening minutes of Tuesday’s special preview: Heart transplant surgeon Dr. Alex Panttiere (played by Alias‘ Melissa George) MacGyvers a medical procedure on a plane, gets her blouse bloodied and then speaks at a conference wearing a retro flight attendant uniform. It’s either cute or gimmicky, depending on your tolerance for such things.

Before you weigh in with your snappy judgement, let’s briefly recap the pilot:

Alex, in case you glossed over the show’s marketing materials, is a rebel. As the hospital’s Chief Innovations Officer, she’s all about cutting-edge medicine – and cutting red tape to do right by her patients. As one of the few female heart transplant surgeons in the country, she’s used to fielding sexist pickup lines like, “What does someone like you like to do in her spare time?” Alex’s reply: “I like long walks on the beach, hot bubbles baths… and the sound of cracking a patient’s chest open like a lobster first thing in the morning.”

At home, things are a little different. The mother-of-two is divorced, but she and her gay, musician ex-husband (Togetherness‘ Joshua Leonard) get on like gangbusters. He gives her fashion advice and is even friendly with her current boyfriend, Dr. Pierce Harrison (Brothers & Sisters‘ Dave Annable). Alex, however, is hesitant about her beau. He did once cheat on her, but the real issue is the return of Dr. Jesse Shane (Childhood’s End‘s Don Hany) as Chief of Surgery. Twelve years ago he was Alex’s mentor… and possibly something more. All that is not lost on Pierce, who tells Alex, “I want you to figure out what you want – as long as it’s not a matter of who you want.” (If you ask me, Pierce > Wannabe McDreamy.) 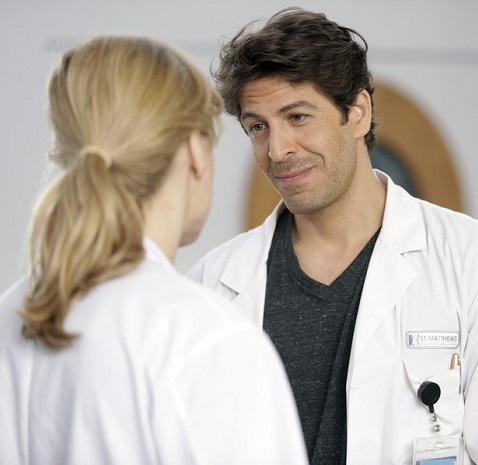 The dynamic between Alex and Jesse is complicated by the fact that she’s now an impressive surgeon in her own right. So when Jesse steals a heart that she was planning to transplant into a dying patient, she fights back – unsuccessfully. But then Alex is able to turn a terrible situation into a gift when her patient’s ex kills himself so she can have his heart. Going against the hospital’s COO Millicent Silvano (Terra Nova‘s Shelley Conn), Alex performs an unapproved piggyback procedure in which the two hearts are joined to beat together forever. (In case you want to know why the doc is so invested in this patient, who has a devoted sister, it’s because her own sis was hospitalized, of course.) And because Alex is a rock star, she goes straight from work to a glam gala, where she runs into Jesse. “Why did you come back?” she asks, to which he simply replies, “It was a good offer.” With even better… benefits?

What did you think of Heartbeat? Grade it via the poll below, then hit the comments to back up your pick!