The following contains spoilers from this Tuesday’s episode of Marvel’s Agents of S.H.I.E.L.D.

Facing a triple-assassination rap whilst on Russian soil, agents Bobbi “Mockingbird” Morse and Lance Hunter (played by Adrianne Palicki and Nick Blood) kindly declined S.H.I.E.L.D. director Phil Coulson’s offer to spirit them away and hide them under fake identities and instead “take a bullet” for the team at large, lest the “decommissioned” organization land back in the world’s crosshairs. So at episode’s end, Bobbi and Lance were (discreetly) toasted farewell by Jemma, Mack, Coulson et al, from the corners and shadows of a bar.

Here, Palicki and Blood share their reactions to their characters’ truly “emotional” send-off, as well as let slip a few hints about their next mission — as the leads of ABC’s Marvel’s Most Wanted spinoff.

TVLINE | Did you know where this episode was leading as you read the script for the first time?
NICK BLOOD | I had a vague idea, yeah. You pick up little bits and pieces here and there, and [writer] Paul Z[byszewski] had kind of given us a few hints as to how it’s going to end. But when you get the script, it’s always a fun day as you race through it to find out what happens. I just loved the way they put it together with the flashbacks, flashforwards… I enjoyed all the interrogation room scenes, it was a nice way of framing the action of the episode.

TVLINE | Obviously things get drawn out with multiple takes and turnarounds, but when you’re doing that final scene there at the bar, does it still get emotional for the cast?
ADRIANNE PALICKI | I cried in every take, whether the camera was on me or not, because every time I would look at Henry [Simmons, who plays Mack] I fell apart.
BLOOD | And in between takes I was poking her.
PALICKI | He kept pinching me under the table! That was the other thing. No, you form these friendships and these bonds, plus it was very parallel to what’s happening [on-screen]. We’re leaving the show, these characters are leaving the show…. It’s emotional.

Watch the “Spy’s Goodbye” scene below, then read on for more:

TVLINE | What were your initial reactions when the idea of a spinoff was first floated by you? It’s quite the compliment, after all.
BLOOD | My reaction was… [silence]. You can’t see that because it was a facial expression, but my reaction was non-verbal.
PALICKI | You were like, “Oh God, I get to be stuck with her.”
BLOOD | That was the face I was doing, the “Oh God, I get to be stuck with her” face.
PALICKI | It is the ultimate flattery, the fact that people believe enough in our characters and the chemistry and fun that we share. And the fact that they had an awesome idea to do something completely different with these two characters…. I couldn’t have been more flattered and excited, and hopeful.

TVLINE | How “completely different” will the new show be?
PALICKI | Well, not completely different.
BLOOD | It’s all in Dutch. They just speak Dutch and it’s subtitled. That’s the main difference.
PALICKI | But Bobbi does it really badly. [Laughs]
BLOOD | Actually, I’m playing Bobbi and Adrianne is playing Hunter.
PALICKI | I think you would make a beautiful woman. No, what I meant was that these two characters will be thrown into a completely 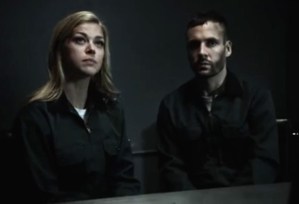 different dynamic. It’s not a world of knowing where we’re going and what we’re doing, being part of a team. It’s us trying to figure out and navigate things, and we only have each other to rely on. It’s very different in that way.

TVLINE | Can you say what the gist of the premise is? Are there any official talking points?
BLOOD | [Clears throat] I think the way to go on that is probably “no.” Adrianne, do you have a talking point?
PALICKI | I thought you would have the talking point!

TVLINE | Lastly, can we expect to see either of you back on S.H.I.E.L.D. this season?
PALICKI | We’re not at liberty to say anything. We go where they tell us to go!

TVLINE | So it’s possible that the next time we see you, it will be as part of the spinoff.
PALICKI | It’s possible.
BLOOD | Or not.