Monday’s episode of Supergirl brought us one week closer to The Flash’s arrival in National City. But until Grant Gustin’s masked hero makes his appearance, we’ll have to settle for a whole slew of flashbacks. (Eh? See what I did there?)

Fortunately, the CBS drama’s latest installment was chock full of blasts from the past, which revealed a whole lot about its core characters. (Are any of us surprised that Winn had a super-dorky hairstyle two years ago? The matted-down look does not become you, Mr. Schott Jr.)

Now that Hank has revealed himself to the public as J’onn J’onzz, it falls on Lucy Lane and her colleague, Col. Jim Harper, to investigate the threat that J’onn poses to society. And you know what that means: origin stories!

While Lucy and Jim interrogate Hank and Alex throughout the hour, we learn the following:

* Ten years ago, Hank Henshaw — the real Hank, who apparently liked to give his employees Dead Poets Society-esque speeches — rounded up his team to find and kill Martian Manhunter, located somewhere in the Peruvian Andes. But when Jeremiah Danvers was confronted with a deadly snake in the middle of the woods during the mission, he was saved at the last minute by J’onn J’onzz, who befriended Jeremiah and told him the story of his tragic past on Mars.

Jeremiah, feeling particularly sympathetic as the foster parent of an alien, vowed to tell the rest of the DEO that J’onn was not a threat — but before he could do so, he was interrupted by Hank, hell-bent on taking J’onn down without protest from anyone else. As he stood over J’onn, ready to off the Martian with a custom-made bullet to the chest, Hank was tackled by Jeremiah, and the two men tussled until Hank was sent sailing off the edge of a cliff. (But Jeremiah also met his demise during the scuffle, revealing a knife in his side after Hank fell to his death. “Take care of my girls,” he urged J’onn — sob! — who shapeshifted into Hank from that day forward.) 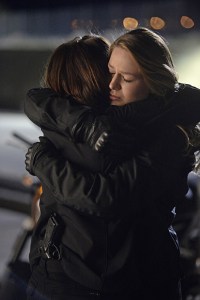 * But as compelling as J’onn’s transformation into Hank is, Alex wins the evening’s award for Most Surprising Backstory. Just three years prior, Alex had super-long hair (!), knocked back shots of liquor like it was no big thang (!!) and got arrested for public intoxication (!!!). But the elder Danvers sibling put the party-girl lifestyle behind her after landing in a jail cell for one night, where she was visited by J’onn-as-Hank. Without telling Alex how he knew her family or her scientific prowess, Hank offered Alex a shot at redemption by recruiting her to the DEO. (And what better way to prove you’re a mature adult than by chopping off your hair into a super-stylish bob?)

* We also get a glimpse at Kara’s first interview for the CatCo assistant job, where she used her X-ray vision to anticipate Ms. Grant’s needs (especially those of the prescription drug variety). But despite her commitment to being Cat’s right-hand woman, Kara clearly had some reservations about stifling her superhero potential indefinitely. (Cue Rachel Platten’s “Fight Song” in 3… 2… 1…)

After spending their afternoons hooked up to a polygraph, Hank and Alex still aren’t able to convince Lucy and Jim that they don’t pose a threat to society, and they’re carted off to Project Cadmus, a genetic engineering facility that treats aliens like guinea pigs, and humans like… well, apparently it’s too appalling to say. In order to free the duo, Kara at last reveals her Supergirl identity to Lucy, in the hopes that Lucy will trust Kara enough to help save her sister. (Long story short: She does.)

In what is undoubtedly the episode’s most badass moment, Kara and Lucy hop on dirt bikes, track down the Army vehicle transporting Alex and Hank to Project Cadmus, and successfully run it off the road. But when Hank attempts to wipe Jim Harper’s memory of the day’s events, he pulls a Game of Thrones and ends up seeing inside Jim’s head, not only revealing that Jeremiah Danvers is at Project Cadmus, but that he’s alive. Alex vows to Kara that she’ll track down their dad somehow, but given that Alex is now a fugitive, that’ll prove mighty tricky.

* Desperate for revenge after she was fired from CatCo, Siobhan sends an e-mail to Cat, pretending to be Kara, in which she is brutally honest with Ms. Grant about all of her shortcomings. But Siobhan’s plan fails spectacularly at the end of the hour, when Winn reveals that he compared his makeout buddy’s typing speed with Kara’s, revealing that Siobhan was the author of said e-mail. Siobhan promptly gets fired again, but on the plus side, her super-powered Silver Banshee scream keeps her from falling to a grisly death off CatCo’s balcony.

* After Jim Harper’s memory is wiped, he enlists Lucy as the new director of the DEO. And even though Alex is now on the run, Lucy gets her own spunky, short-haired second-in-command.

In fact, bring all of your thoughts on this week’s Supergirl to the comments section, hairstyle-related or not.