Like a mom blasting Iggy Azalea from her Kia Sedona in the middle-school pickup lane, NBC’s new medical drama Heartbeat is so desperate to be cool, it’ll make you reflexively wince, then pretend you can’t see it.

Melissa George (The Slap, Alias) stars as Dr. Alex Panttiere, a woman who requests a fire-department escort to a routine biopsy just so she can test the ability of her convertible to go from zero to 80, then drops groan-inducing one-liners like, “I love the smell of lung burning first thing in the morning!” 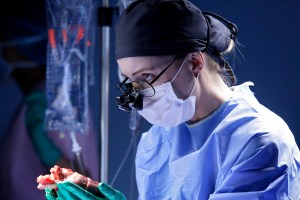 All of Alex’s quirks (she has a tendency to spit while talking) and surgical brilliance (practically on a whim, she pulls off a heart transplant procedure that only four others have managed before her) can’t mask the grim fact that she’s ultimately a collection of threadbare drama-series clichés: She hasn’t got time or use for her hospital’s ethics committee — potential lawsuits be damned! She doesn’t know how to make friends — but dammit, her med-school colleague and current boss Millicent (Shelly Conn) has a soft spot for her anyhow. Alex snuggles on the regular with her gay ex-husband, while her two kids get about as much character development as her scalpel and clamps. She reduces her interns to dismissive nicknames, then chooses the shortest one as her sidekick, demanding he “show up, shut up and be beige.” (It remains unclear whether this is an instruction to blend into the background or a meta commentary on his skin color/ability to bring diversity to her team.)

While NBC notes that Heartbeat (previewing Tuesday at 9/8c before moving into its regular Wednesday 8/7c timeslot) is “inspired by the real life and achievements of Dr. Kathy Magliato,” its initial medical cases are remarkable only in that they’ll probably make you think, “Wait, didn’t I see something similar on Grey’s in Season 2 or maybe E.R. back in the day?”

Even worse, the show’s supporting characters are all some combination of bland, unbelievable, and/or reprehensible. Jamie Kennedy shows up as a brilliant surgeon with terrible body odor who refers to Maya Erskine’s Korean-American nurse as “Ping Pang Pong.” Instead of reporting him to H.R., though, she’s already beginning to develop a crush on the creep by the end of Episode 2. (If it makes you feel any better, Kennedy’s brutally unfunny racism/sexism/lecherousness extends to non-Asian characters, too, like how he’s given another colleague the nickname “One-Eyed Black Man.”) 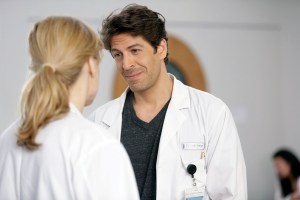 Heartbeat also finds Alex torn between two lovers (who conveniently work alongside her): There’s her long-suffering hunk of a boyfriend Pierce (Dave Annable), who can’t quite break down Alex’s walls, and Jesse (Don Hany), Alex’s aloof erstwhile mentor who’s back in town with his Aussie accent and his rugged jawline.

You’ll want Alex to choose the latter surgeon — if only to free the charming and charismatic Annable from having to deliver wretched lines like “Isn’t it usually the girl who wants to talk about their feelings?” (Come on, TV networks, can’t we find a quality role for the infinitely watchable Brothers & Sisters star already?)

In fact, if anyone at NBC has any sense, they’ll have already negotiated a longer-term deal to lock in Annable for some future, juicier role on its 2016-2017 lineup. Heartbeat, after all, looks destined to flatline.

The TVLine Bottom Line: Put down the shock paddles. There is no saving NBC’s newest medical drama.