I’m not sure if The Good Wife‘s Lucca Quinn takes longer than your average attorney to score a bowl of chips while out for drinks at a Chicago pub.

But even if said mission required her to exit said establishment, walk down the block to the nearest corner store and smuggle back a bag of Funyuns, I’m pretty sure her pals Alicia Florrick and Jason Crouse wouldn’t have time to safely “shock the monkey” underneath their corner table before Lucca’s return. 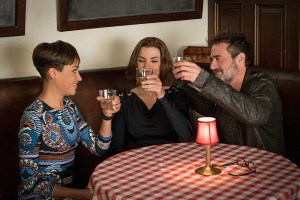 Not cool, Jason! Not cool, Alicia! Not even if you promise to cover Lucca’s bar tab for the next 12 months — there are just some things that can’t be unseen!

Anyhow, while you debate whether I’m unnecessarily harshing on a delicious moment of dirty hotness, allow me to recap the action from Season 7, Episode 17:

GRACE UNDER FIRE | The week’s best storyline finds Alicia going toe-to-toe with a steely college admissions officer who’s been using a software company’s program to detect plagiarism in students’ application essays. When Grace’s quotation of the Sermon on the Mount gets her flagged — and potentially blacklisted — Alicia winds up threatening “the class action suit to end all class action suits” — and Grace finds it all so inspiring that she decides she’s destined to follow her mother into the legal profession. I kinda wish the show’s writers had delved deeper into this arc — not only because the technological aspect of the case seemed tailor-made for a Good Wife deep dive — but also because Alicia is most fun when she’s deeply incensed and not trying to contain her vicious edge.

DOES ANYBODY CARE ABOUT CARY? | Diane takes Alicia out for martinis — though Alicia sticks with water — to discuss her idea for a firm consisting of only female named partners. When Alicia mentions Lucca’s unhappiness with cubicle life, Diane tests the younger associate on the case of the week, and finding her awesome, moves her into an empty office. Alicia is sufficiently pleased with this development to the point that when Cary approaches her and once again asks if Diane is looking to oust him, Alicia ignores Lucca’s advice, lies with a casual smile and tells him he has nothing to worry about. Maybe it’s law-firm musical chairs fatigue, but I hate where this arc is going — and I’d hate it just as much if it was Alicia and Cary aligning against Diane. How is it that David Lee isn’t the one on the ropes? 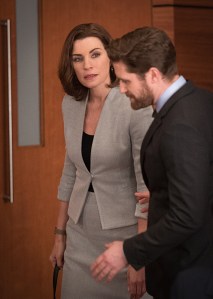 THAT TEACHER FROM GLEE MIGHT BE CRAFTIER THAN WE FIRST THOUGHT | Speaking of being on the brink of a TKO, Eli continues his semi-comic handicapped bathroom eavesdropping and learns at least one member of the grand jury investigating Gov. Florrick doesn’t believe the testimony of Peter’s big donor whose son’s murder trial ended in a mistrial. Alicia is instructed to play up said donor’s selective memory — and it’s pretty hilarious to watch U.S. Attorney Connor Fox flail at answers when he’d expected Alicia to plead spousal privilege. But at the end of the hour, be brings back the donor (Lloyd Garber) and Mike Tascione’s chihuahua isn’t enough to calm his nerves about what it all means.

THE OTHER WOMAN?! | Alicia happens to spy Jason greeting a sexy blonde woman in a bar with a kiss that definitely says “more than just friends.” Lucca eventually breaks Alicia’s confidence and tells the sexy investigator what’s bugging her buddy, but when Jason tries to come clean, Alicia cuts him off. “I am married. If anyone should be explaining, it should be me,” she says, clearly having made peace with her jealousy. And just like that, everything’s all bawitdaba-chica-wah-wah — leading to the subsequent happy hour where Alicia throws her saintly public image to the wind, whispers dirty to Jason and unzips his pants under the red-and-white-checked bistro tablecloth. 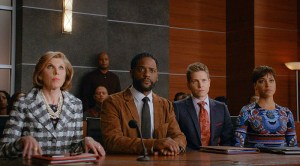 CASE OF THE WEEK | The episode begins with a gut-punch opening sequence where we see Blair Underwood as a hopeful dad reliving his baby girl’s milestones — right up until she’s shot in the neck on prom night by a stray bullet fired by a drug dealer next door. The subsequent action — Underwood’s motel owner gets sued after putting up a billboard blaming a local gun shop for taking his daughter’s life – is a little less nuanced than the best of The Good Wife’s legal moments, but Underwood’s quiet grief makes it nevertheless compelling. And all’s well that was maybe only B/B- writing when Judge Abernathy rules in favor of the plaintiff — then tells Underwood’s character that he’ll have to pay a dime for every day he fails to take down the billboard.

What did you think of this week’s Good Wife? Were you turned on or turned off by Alicia and Jason’s public sex? And where is this Grand Jury business heading? Share your thoughts and theories below!