This week on ABC’s Once Upon a Time, Emma received help in finding Hook from a most unlikely source, while the first deal that Rumplestiltskin ever made came back to bite him, hard, in the present day.

As dastardly as this episode’s final twist was — and as welcome of news as it must have been for one fan base — I must take issue with the chain of events that got us there. Namely, Rumple not just doing Hades’ bidding and destroying the heroes’ ride home from the Underworld but also pitching Milah into the River of Lost Souls, which among other things deprived her of finishing her business and thus reuniting with son Baelfire (assuming she wound up in the same place, which I don’t think is a foregone conclusion).

Yes, Hades did allude to having to “kill all of you” if Rumple didn’t strand his friends in the Underworld, in trade for being “back home in bed with Mrs. Dark One by 10 pm.” So I suppose that was a compelling reason for Rumple to follow through. I just would have liked to see more bargaining/jockeying for power before he rolled over for the Underworld’s overlord.

The return of Milah had more resonance than I expected, and was not just played for awkward tittering (such as when she pointedly observed 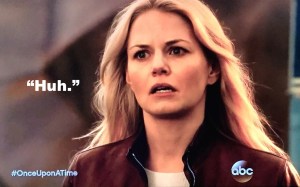 that Emma had been “with my former lover and my son”). I was happy to see her volunteer to help Emma, in the name of doing something “generous” that might make up for her selfishly abandoning Bae for a pirate back in the day. The flashbacks with Milah and Rumple, meanwhile, connected some interesting dots on what exactly pushed her in that cad Killian’s direction, after Rumple “sold” their (non-existent) second-born child to the magic man, to get young Bae the snake antivenom he needed. (As for my quip above about Milah’s fuzzy eventual fate, one could argue that having been so greatly wronged by her husband, who fated her to such a “narrow” life with no more children, maybe she gets a free pass…? Discuss.)

All of which teed up the big reveal, that when Rumple in his Underworld shop crafted a crystal ball and in it saw Belle back in Storybrooke, he had not set out to see her but his child, as in Neal. But Belle herself is now pregnant, Hades reports, thus upping the stakes for Rumple, who due to the stricter contract law in the Underworld still owes his second-born to Hades vis a vis Fendrake. As such, until Hades says otherwise, Rumple shall do his bidding — starting with one specific mission….

Elsewhere in the episode, Emma (with Milah and Rumple’s help) was able to save Hook from his dip in the River of Lost Souls — which seemed, um, remarkably easy. Yet when they returned to Regina, Snow et al, the plan to split Emma’s heart, save Hook and have Regina poof! them home hit a major snag — because Hades had gone ahead and did what Hook refused to, etching the names REGINA, SNOW WHITE and EMMA onto the three headstones, thus preventing any heart-ripping or trips back home.

What did you think of the episode “Devil’s Due,” including Regina’s side mission to seek out Daniel?