You’ll be happy to know that Pee-wee Herman hasn’t done much growing up in 26 years — and the years have been very good to him.

Nearly three decades after shutting the doors of Pee-wee’s Playhouse, the beloved man-child has returned to us (via Netflix) in Pee-wee’s Big Holiday, which landed on Netflix early Friday morning after premiering to an enthusiastic crow at South by Southwest.

Starring Paul Reubens in the title role, Holiday finds Pee-wee exploring life outside of Fairville after a chance meeting with a charismatic, hog-riding stranger named (and played by) Joe Manganiello. Along the way to the True Blood star’s birthday party in New York, Pee-wee encounters the exact types of weirdos you’d expect to be pulled into his nonsensical orbit: a trio of bank-robbers (one played by Arrested Development‘s Alia Shawkat), a farmer and his near-dozen daughters, and a bus full of traveling hairstylists — to name just a few.

All of the above makes for an expectedly zany 90 minutes of pure, unadulterated Pee-wee, very much in the spirit of his Big Adventure in 1985. For fans of Reubens’ bow-tied alter ego, it’s like getting a warm hug from an old friend — or, you know, from a big blue chair with teeth.

OK, here are your marching orders: Check out Pee-wee’s Big Holiday on Netflix, then come back here to grade it and drop a comment with your full review. 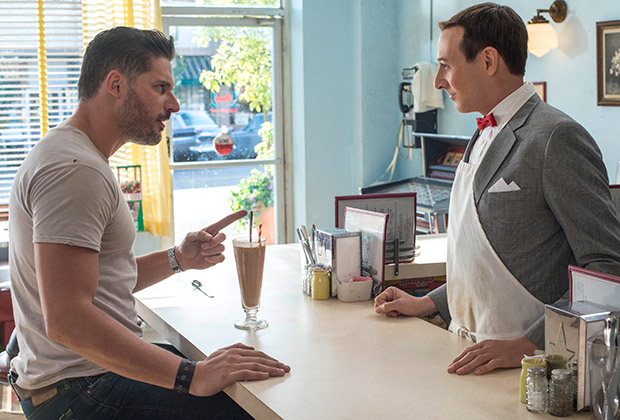