What if Jesus Christ was dressed in prison orange and carted away by modern-day police officers in riot gear?

That’s just one of the modern-day constructs of Fox’s The Passion (airing Sunday, 8/7), a live musical that star Jencarlos Canela says will appeal to a younger generation — without alienating devout churchgoers who want to follow along, word-for-word, with their Bibles.

“It’s the biggest story ever told — and so many people know it in a certain way. And when the word ‘change’ comes up in our lives, we naturally fear it, but only because we don’t know it,” says Canela, who plays Jesus. “This production looks different, but the essence of the story and what it’s about hasn’t changed at all. I could try to explain that for 30 seconds or 30 minutes, but you really have to see it to believe it with your own eyes.” 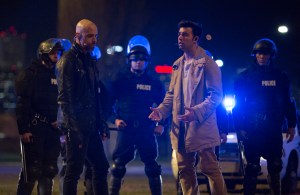 One other startling aspect of The Passion is the fact that it’s being staged in the streets of New Orleans — and will feature modern pop music and hundreds of people carrying a 20-foot, illuminated cross from outside the Superdome to the live stage at Woldenburg Park on the banks of the Mississippi River.

“I’m pretty sure you guys are going to hear all kinds of noises. It is live, after all,” says the star of NBC’s recent comedy Telenovela, when asked about whether the hum of a busy urban center might interfere with the production.

Not even the idea of interference from everyday New Orleans residents makes Canela skittish, he contends. “If we come across a lost soul, someone who’s going through a rough time, someone who is angry or says something that’s not positive, we’ll embrace it,” he says. “We’re not one bit scared. I’ve felt lost before in my life, too. So we have to handle those situations in the only way this story knows — with love. ‘I feel you, brother. I feel you, sister. And if you want to continue this procession with us, come along.'”

With Glee vet Adam Anders helming the music — including Phillip Phillips’ “Home,” Whitney Houston’s “My Love Is Your Love” and Imagine Dragons’ “Demons” – Canela is confident there’s an easy hook for younger viewers who “might feel a little disconnected from this story.” 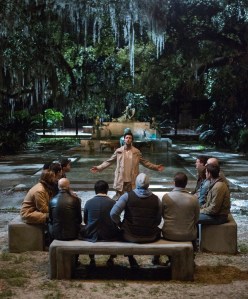 Of course, Canela says that performing these tunes in the context of The Passion is very different from his Latin pop concerts. “I’m crying in some of these scenes where there is dialogue — and then the song kicks in. Or halfway through a song, I have to stop and argue with my father, and then the song picks up again. And you’re going to hear those tears in the music — it’s not going to be perfect,” he warns. “But at the end of the day, we don’t want people to say ‘Oh, what a nice concert!’ We want people to say, ‘I’ll never forget this story told this way.'”

Canela also had to alter his singing style for The Passion, since producers “didn’t picture Jesus doing runs or trilling or melisma. They want the audience to forget Jesus singing — and make it as conversational as possible. I agreed with the decision, but it was a bit of a challenge.”

Asked which of his own musical numbers is most emotional, Canela points to a duet with Seal (as Pontius Pilate) on “We Don’t Need Another Hero”; a cover of Train’s “Calling All Angels” that he promises is “the most vulnerable we’ve ever seen Jesus”; and a “heartwarming, skin-tingling, jaw dropping” rendition of Katy Perry’s “Unconditionally,” backed by a 40-person choir, that is set against Jesus’ resurrection.

Oh, and for those who might feel skittish about witnessing the moment of Jesus’ death, Canela says not to worry.

“I have so much respect for the symbol of the cross — but sometimes when I walk into church and see the image of Jesus nailed to the cross, I wonder, do I need to constantly be exposed to that to remember what my Father did for me?” the actor says of the production’s decision to not show Jesus’ crucifixion. “The cross truly represents hope, love and peace. When you see this huge cross being carried through the city by this diverse group of people — all with real testimonies — that is God. We are God.”