Tuesday’s Pretty Little Liars finale took the concept of “unmasking” its latest villain to a whole other level, and the villain in question couldn’t be more pleased with the final results.

“It was a very specific process, one I was conscious not to mess up,” Huw Collins tells TVLine about his transformation from “Wilden” back to Elliott. “I really wanted to do the moment justice and bring some depth to my performance, even as I was taking off the mask exactly as [Bryce Johnson] did, matching his movements. The mask reveal could have been cheesy, as it sometimes is on TV shows and movies, but that wasn’t the case at all. I think it looked great, very convincing.” 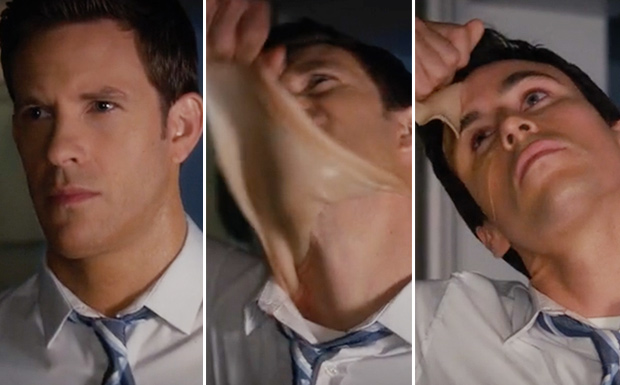 “The actual process of getting the mask made was really fun,” Collins adds. “I had this rubber lacquer poured over my head so they could make a cast of my face. I sat there for 20 minutes in complete pitch black; I couldn’t sneeze or scratch my nose.”

Below, Collins gives more of his thoughts on the big reveal, shares his hopes for Season 7, and speaks candidly about a potential Alison/Emily pairing.

TVLINE | I’m sure you’re sick of this question, but when did you find out this was happening? What was your reaction?
I found out fairly late on. When I first went for the role, he was this sweet guy who had fallen in love with his patient’s sister, as one does in Rosewood. That was all I knew. As the season went on, I asked one of the producers, “Am I reading into this subtext correctly? It feels like something’s not quite adding up.” And they said, “Oh, you’re not meant to know that yet.” So I had an inkling, and as things went on, they told me he was bad. Getting the script for the finale was an interesting surprise; what a pleasure to be given the opportunity to have a great reveal at the end of a finale on a show like this.

TVLINE | Andrea Parker told me you two didn’t meet until the day you shot the big reveal.
Oh, yes. We met that day for the first time and instantly got along. She’s hilarious and fun and such an involved actress. It was a real load of fun trying to figure out the bones of that scene, and I can’t wait to get back to working with her. She’s a blast.

TVLINE | She also said she was surprised by your accent.
[Laughs] That’s a compliment to me. I think a lot of people are surprised by it.

TVLINE | You’ve mentioned that your wife is a big fan of the show. Did you have to keep all of this from her?
Well, Molly knew, because I had to go in for the mask fitting and stuff like that. In fact, I found out I was being fitted for the mask whilst we were in Tuscany having our marriage celebration. Production e-mailed me then, so I couldn’t really not tell her. … And I think she was disappointed to know that. She’s been watching it forever, so I felt like I was ruining it for her a little bit. Of course, there were still other things in the finale that shocked her.

TVLINE | Has Marlene King told you anything else about Elliott?
She has, but given the amount of backstory that’s been left open after the finale, I think it’s safe to say I don’t know everything. But I did have a good chat with Marlene this week about Elliott, so I know more than I knew before. We start shooting [Season 7] soon, so I want to make sure I have it all sorted out and can do the character justice.

TVLINE | What are you most excited to do in Season 7?
I think being able to step into the kind of morally corrupt element of Rollins is going to be really fun. I don’t know exactly how it’s going to go, so I can’t say too much out of a lack of knowledge, but I do hope there’s a duality to him. I hope that he will be able to play these two characters for a little bit; the only person who knows the truth is Mary. As to how quickly that’s revealed to Alison and the other liars, I don’t know.

TVLINE | Elliott wasn’t exactly beloved by “Emison” fans. Now that we know what we know about him, do you have a different message for them?
On some level, I kind of had to play the character on- and off-screen. I’m playing a character who’s supposed to be with this girl, so I couldn’t really go online and say I want her to be with someone else, which would directly impact my future on the show. For a while, I was definitely more Team “Ellison,” or whatever it is, but I have a soft spot for “Emison,” and certainly to their fans who keep me constantly amused with their thoughts and opinions. Going into Season 7, I’d like to see “Emison” happen; I know the fans have wanted it for a long time. I’ve always liked that the show tackles LGBT issues, and given the demographic, I think there a lot of viewers who can relate to what those characters are going through. Alison has certainly struggled to figure out if she’s straight or bi or gay, and I think it’s a great example of something that goes on in real life. … I’m glad that, going forward, I can actually say that I hope Alison and Emily end up together.

PLL fans, what’s your take on the Elliott reveal? Ali’s future with Emily? Whatever’s on your mind, drop it in a comment below.