WARNING: The following Q&A contains spoilers about the Season 2 finale of How to Get Away With Murder. Please make like the spinning cheerleader and fly if you don’t want major plot points unceremoniously uncovered.

Where in the world is Frank Delfino?

At the end of How to Get Away With Murder‘s Season 2 finale, Charlie Weber‘s character had cleared the personal belongings from his apartment and made off for parts unknown — much to the shock of his estranged girlfriend Laurel.

Of course, Frank had very good reason for a hasty exit. Not only did his boss and mentor Annalise Keating (Viola Davis) learn that Frank — at the behest of her late husband Sam — had murdered coed Lila Stangard, but she also discovered why.

It turns out that 10 years prior, Frank had accepted a bribe from Annalise’s client Wallace Mahoney to bug her room. When the hedge-fund manager learned Annalise was planning to share damning information with the prosecutor who was trying his son for murder, he staged a horrific car accident in which Annalise’s unborn baby was killed.

Wracked with grief, Frank spilled the beans to Sam — who, in turn, swore Frank to a decade of secrecy — and later used the ugly secret to coerce Frank to murder Lila (who was pregnant with Sam’s child).

Was Frank responsible for the shocking, end-of-the-hour shooting of Wallace? Will his character be part of the cast in Season 3? We grilled Weber for answers.

TVLINE | What did you think when you got the script for the Season 2 finale? It’s a doozy for Frank.
Oh, it’s a real doozy! But to his credit, executive producer Pete [Nowalk], who I love so much, gave me some time to wrap my brain around this one. These big reveals can come at you out of nowhere, but this one was big to the point where we’ve been talking about it — and it did come up much earlier that this [arc] was a possibility. I was still devastated to be responsible, but I had a good chunk of time to process it.

TVLINE | How long did you know about Frank’s actual betrayal — bugging Annalise’s hotel, and how it led to the death of her unborn baby — versus the general idea that he betrayed her somehow?
I didn’t know the exact event — but we had gone as far as discussing Frank being responsible for the death of Annalise’s unborn child. I was devastated when I heard it.

TVLINE | We’re so used to seeing Frank in total control of the situation, so it was fascinating to see the “10 Years Earlier” flashbacks — where he’s younger and dumber and less shrewd. What was it like getting to play those notes within the same character?
It was so great, and it was challenging – more on an emotional level — because I love Frank. The Frank we know today is in my bones, and I love playing him. But I wanted there to be this stark raving difference between Young Frank and Old Frank. I toyed with the idea of having Young Frank still be this savvy young guy, but then it hit me, there was going to be an event that would change him completely, so I knew he needed to be very different. So, [in flashback] he is young and naive, and it’s part of the reason he makes that stupid decision to take the money and plant the bug. He doesn’t know what he’s doing, and he’s in for a rude awakening and being responsible for that. And it’s also telling about the way he is today, and how that monster was born.

TVLINE | I know Frank says he wouldn’t have planted the bug had he known Annalise or her unborn child were in danger. Do you totally buy that? Is it possible that for a moment, he didn’t care — because the money was so tempting and Annalise was being so dismissive of him?
I don’t think he had any idea the Mahoneys would go that far. He thought they were the kind of people who had so much money, they could get the case thrown out — or get Annalise thrown off the case. Had he known this was their intention, I truly believe he wouldn’t have done it. He was hesitatant anyway. Even with the money, even without knowing how far the Mahoneys would go, he still hesitated to plant that bug in Annalise’s room. And this destroyed him — this absolutely destroyed him. Young Frank is dead because of that, and the modern Frank we known now is a completely different human being. That’s the moment it started.

TVLINE | I loved that we saw the suitcase of money — a nice callback to Season 1 when Frank first broke that cash out. But now we know the origin of it. Do you think he never spent it because of what happened as a result of the payoff?
Frank likes money — and I’m not going to pretend he doesn’t. He likes nice things. He drives a $100,000 car, he wears a different Rolex every day of the week. But what that money means is something he really can’t deal with.

TVLINE | Frank’s confession to Sam is so immediate and so raw. It was a surprising choice to me as a viewer.
The moment Frank found out what happened to Annalise, he completely fell down and lost sight of anything but that moment in time. He needed to get that off his chest, and it’s funny how in a way, that’s a selfish thing to want to divulge this information. When Sam tells Frank, “This will destroy her,” that’s when Frank realizes she can never find out. And he’s gonna have to live with the burden of that guilt for the rest of his life. And that’s why in the present day we have a Frank who is so wildly loyal. There’s nothing Annalise could ask him to do that he wouldn’t do.

TVLINE | What was it like playing that scene with Tom Verica?
That was devastating. Something will never be the same for those two people. Tom is such a talented, raw actor. That moment had weighed heavy on my mind — and to make that moment real, to make people feel the pain of being responsible for that actual event, it was not easy. A little piece of that scene will always be with me.

TVLINE | What do you say to fans who wonder what possessed Frank to stick around after that hospital confession? Do we buy that? Why not just say, “I’m the worst,” take the money, go away, and stay out of these people’s lives?
But that’s the justification of his whole existence — that he is living life for Annalise! And that’s why now, going forward, we’ll see what kind of break he makes and how it will consume him to get back in her good graces. It’ll be interesting. In a lot of ways, though, he feels his life belongs to her. 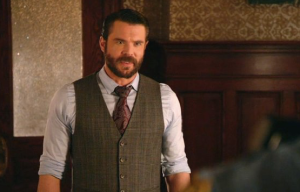 TVLINE | Is Laurel the undoing of Frank? He has this love for her, which prompts him to confess to killing Lila, and that’s where things start to unravel for him.
He definitely let his guard down — which is out of character for him. And yeah, there could be a lesson learned there for Frank. But when telling someone “I love you” comes out as “I killed Lila,” you have to wonder if that person is capable of real love or what their idea of love is. That was a real rollercoaster for him, and he’s a little worse for the wear on the other side of it.

TVLINE | We see Frank’s emptied-out apartment in the Season 2 finale, and we’re left wondering what became of him. Do you know where Frank is? Or are you in the same boat as fans — spending the summer wondering where he ran off?
My mind, as Frank, goes certain places. But ultimately, Pete Nowalk is the only person who knows the truths about these things. He seems to let things simmer before he puts pen to paper.

TVLINE | Are you a series regular in Season 3?
Yes. As far as I know! Have you heard something? [Laughs]

TVLINE | Is there any way Frank gets back on the team — with Annalise knowing Frank killed Lila, and that Frank had a role in the loss of her baby?
I don’t know if there’s any way even Bonnie and Annalise can stand in a room together the way things have shaken out. So it’ll be really interesting to see what happens in Season 3, to see how the show adapts and changes shape because of the realignment of certain relationships. But you know, it’s not about Frank getting back on the team and going to court. He doesn’t give a s–t about that. He just wants things to be OK with Annalise. Of course, this is just me talking. I have no idea what will happen – and we could find our way back, go through those motions of normalcy of going to court and giving ourselves a purpose — so we don’t have to solely deal with the other aspects of our lives. There was so much information and so much closure [in the episode] that it could go anywhere.

TVLINE | Could Frank turn against Annalise if she freezes him out for too long?
For me today, and where I am emotionally with the character of Frank, and how he feels about Annalise, I can’t imagine it. But over the course of time, it’s amazing the things that can happen in a relationship. That’d be a big one.

TVLINE | Do you think Frank shot Wallace Mahoney?
It would certainly fit the story, but again I have no idea who pulled that trigger — or why. Wallace was a powerful man with a lot of enemies, and Frank is certainly one of them.

TVLINE | Did you like that Frank did not know Wallace was Wes’ father until Laurel spilled the beans… that Annalise still to this day holds some secrets for herself?
The fun thing about this season was seeing, “Oh, these two people have a secret from everyone else,” and “this person has a secret, too.” Until Frank said it out loud [to Laurel], the only two people who knew Frank killed Lila were dead… Sam and Lila! Before he put that out there, it was Frank’s secret alone.

TVLINE | Frank framed Catherine, killed Lila, disposed of Rebecca’s body. Is he a bad dude inherently? Do you view him that way? Or has he just fallen into this role to wipe away the guilt of what he did to Annalise?
It started that he would do anything for Annalise, but the way he lost himself, he never came back from that. There is a piece missing, and there is this moral ambiguity about him. What’s interesting, too, is that he’s good at that stuff: He’s good at kidnapping people, he’s good at hiding bodies, and that’s not something a lot of people are good at — as far as I know. All that gives him worth and value; it makes him feel good about himself to be able to do those things for Annalise. Guilt does not keep him up at night. It’s quite a quandary. Is he a good guy? I wouldn’t say so, but he wants to be a good guy for Annalise — and that makes him a bad guy for the rest of the world.