R.E.M.’s hit single is still four years away on The Americans, but it’s already (almost) the end of the world as the Jennings know it during Wednesday’s Season 4 premiere, and Philip doesn’t feel fine.

Throughout the hour, the spy is haunted by memories of himself as a young boy, beating another child who was taunting him. But little Misha, as he was called then, didn’t just punch the kid. He hit him in the head with a rock – repeatedly – in a scene that is both illuminating and horrifying.

Philip confesses a sanitized version of the story during an EST meeting, leading to a heart-to-heart with Stan’s ex-wife, Sandra, over dessert at a restaurant. (That meal will cause trouble for Philip later.) Rather than being angry, he tells her he just feels bad about the brutal incident. There is clearly something dark inside Philip, but from the series’ start, he has always felt conflicted about the terrible things he does. 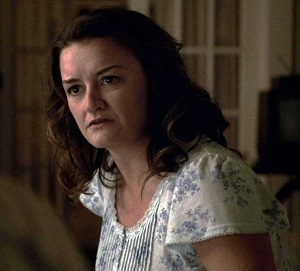 Speaking of awful, Martha learns that in order to keep her safe, Philip planted the recorder in her colleague Gene’s home and made it look like the “mole” committed suicide. “I didn’t agree to this! I didn’t want this!” an upset Martha cries. “What have you done? What have I done? It’s my fault. I killed him.”

Philip informs her that he can’t come back to her apartment, given Stan’s suspicions. “But it won’t change anything between us,” he reassures her. They’ll be at his place just as often as they used to be at hers. Martha looks like she doesn’t want to be within 100 feet of her husband, let alone in the same bed as him. Still, she comes around later on with some FBI surveillance logs for her hubby. 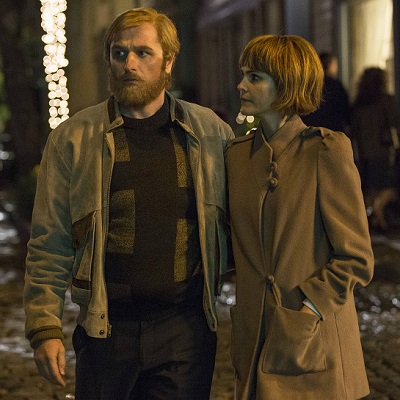 Meanwhile, Gabriel introduces Philip and Elizabeth to their most dangerous mission yet: biological weapons. The pathogen sample the pair need to pick up from Dylan Baker’s scientist is so hazardous that their handler tried to keep them away from the assignment, which requires a vaccination. When they finally acquire the vial, containing a disease known as Glanders, Philip — in a memorable new disguise — is concerned that the shots they got against something meningitis-like aren’t going to cut it. “This is to meningitis what bubonic plague is to a runny nose,” the scientist scoffs as Philip pockets the container. Translation: Do not let that stuff out!

Unfortunately for Philip, when he arrives home, Stan tussles with him and demands to know if he and Sandra are having an affair. Turns out, the FBI agent’s new girlfriend witnessed that post-EST meet-up. Under normal circumstances, an angry ex-husband would be Philip’s biggest concern, but this is The Americans, so he’s more worried about the potentially lethal pathogen in his jacket. After Stan leaves, Philip nervously inspects the vial, which is miraculously unharmed. (Maybe clothes in the ’80s had better padding?)

* Despite last season’s huge Pastor Tim cliffhanger, that storyline doesn’t actually take up a lot of real estate in the episode. (That will, of course, start to change next week.) Paige is regretful of her actions, while Pastor Tim wants to know if her parents would be willing to come in and talk.

* Nina’s mission with Anton is going to so well, she feels comfortable enough to issue an demand: She wants to see her… husband! #NinasManyMen

* Tatiana is working for Department 12, which is connected to biological weapons. Arkady is not pleased to learn that there’s an op within the Rezidentura going on without his knowledge and that Tatiana appears to be above his rule.

Americans fans, what did you think of the season opener? Grade it via the poll below, then hit the comments to back up your pick!