Please hold off on asking How to Get Away With Murder EP Pete Nowalk about his vision for Season 3.

“There are several ways we’ve backed ourselves into a corner” with Thursday’s Season 2 finale (10/9c on ABC), he explains. “That’s my favorite thing to do, but it means I really don’t know [which direction] we’ll head next.”

Network promos for the episode promise, “Three backstabbers exposed, two dead bodies added to the count, and one bloody good ender” (with images of gore dripping from a kitchen cabinet and a suitcase full of cash).

But Nowalk warns that the “slower-paced” hour takes Annalise away from the fictional Middleton University in Philadelphia, leaving Frank, Bonnie and the Keating Five to deal with sorting out the final pieces of the Hapstall murder mystery. Read on for teasers about that arc, Frank’s uncovered secret and Wes’ reaction to the ugly truth about his biological father. 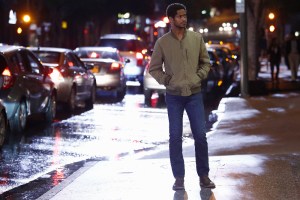 TVLINE | Last week, Annalise told Wes about his mother’s suicide — and also revealed that he was conceived when his mother was raped by Wallace Mahoney. Was that the whole story, or should we assume there is still more to uncover from Wes’ past?
We have one episode left, and there are going to be more flashbacks. There are other layers to Wes’ story. I think they’ll surprise some people.

TVLINE | The Mahoneys have loomed large in these flashbacks, and when the show was casting Adam Arkin, Wilson Bethel and Roxanne Hart, it was suggested their characters could continue to recur in Season 3. Is it safe to say the Mahoneys’ arc won’t end with Thursday’s episode?
I can’t even answer… We’ll go back to work in two months and see how we feel, but obviously there’s a big storyline for Wes and Annalise there. There’s a lot of unfinished business — but you’ll find out more [on Thursday] about the future of that storyline.

TVLINE | Without giving away too many spoilers, what can you tease about Wes’ response to the bombshell news. Is he going to make some big moves regarding the Mahoneys in the finale?
I’m trying to answer that in a way that’s vague. Wes was reactive a lot of the time when he was more immature, and I think he’s trying to handle things in a more slow and gradual manner. Whether he can actually do that or not, that’s the question for the finale. We know that Wallace Mahoney is in New York. It’s not that far from Philadelphia.

TVLINE | Speaking of the flashbacks, Annalise got hit by a car at the exact moment she was making a phone call regarding the Mahoneys’ coercion of Rose’s alibi. Should we assume that was no coincidence?
I’ll just say “no comment” to that.

TVLINE | Last week’s hour also ended with a drunken Laurel getting in Annalise’s face — and spilling the beans about Frank, not Sam, having murdered Lila Stangard. That’s an enormous betrayal.
Absolutely. And if I’m Annalise, I would run away to [my] mother, as well. Everything she thinks she knows, all the people closest to her, she’s found out they have been lying to her. So she’s alone. She’s been betrayed by another man. For Annalise, the finale asks, “What does her life mean now?” 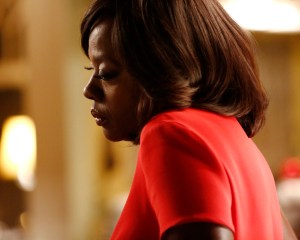 TVLINE | You told me a week ago that the Season 2 finale is slower-paced. Does Annalise spend the whole episode at her mother’s — or is it a place where she regroups, then comes raging back to Philadelphia to kick ass and take names.
It’s more of the first [option]. Cicely Tyson [who plays Ophelia] just happened to be available for this timeframe — and there was nothing more exciting to me than that. And it felt new to me to have a finale where Annalise was not in Philadelphia. That’s going to be strange, and I’m interested to see how people react to it. We’ve had really high-adrenaline [season and mid-season] finales, and of course, there’s exciting things that happen in this one, too. But for me, that’s what felt so different than the rest of our finales. Annalise is around her family. She hasn’t gone home in 20 years, so there’s a lot to deal with there.

TVLINE | Anyone you can tease?
What’s great is that Viola knows this stable of actors that I haven’t seen on television a lot before. I’d rather people just discover the family [rather than reveal anything beforehand]. It’s always fun for the audience to be a little bit behind. Does Annalise have sisters or brothers? Who are these people?

TVLINE | There are two looming mysteries fans are expecting you to deal with. First and foremost, the Hapstall murder case. How does that get resolved with Annalise out of town?
Obviously, the students and Frank and Bonnie are going to be very alarmed that Annalise isn’t there, and they’re going to have to pick up the pieces to deal with Caleb being missing and Philip’s whereabouts. We will wrap that storyline up. Our season-long case was the Hapstalls, so it feels really nice that we get some answers — and in a way that’s pretty shocking. And we also still have to wrap up the reason Frank killed Lila.

TVLINE | Which one of those is going to be more shocking to viewers?
Oh, I have no idea. The things I think are shocking, sometimes people don’t find shocking. They’re like “Oh, yeah, we knew that.” We get answers, but they might not be the exact answers people want.

TVLINE | I got suspicious the moment Caleb went missing. He’s a big guy. I feel like it would be hard for Philip to overpower and kidnap him. No?
I don’t know. Phillip seems scary to me, but anything’s game. 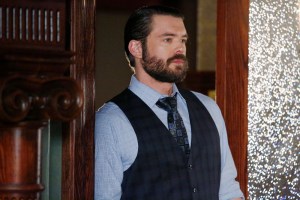 TVLINE | Last week’s flashback gave us more hints about Frank’s backstory, that he somehow was rescued from a difficult life by Sam — and that Annalise had hired him more as a favor to her husband. How much more will we find out about that?
Annalise says, “Sam picked you up out of the gutter and forced me to hire you.” To me, it’s clear that Bonnie was someone that Annalise found, and Frank was someone Sam found. We haven’t shown how they all met each other that first time. I would like to save that for future seasons, but we’ll get more Sam and Frank secrets in the finale.

Excited about the HTGAWM finale? How do you think the Hapstall case will wrap? And who’s your prediction for those “two dead bodies”? Sound off below!