Hulu is facilitating a rather unexpected reunion — Life Unexpected, that is.

Britt Robertson — who starred on The CW’s short-lived drama — will recur on Casual, which is exec-produced by Life Unexpected creator Liz Tigelaar.

According to THR, Robertson will appear in Season 2 as Fallon, the smart and sarcastic assistant to Vincent Kartheiser’s venture capitalist Jordan.

Since Life Unexpected, Robertson’s TV credits have included Under the Dome and Secret Circle.

* OWN on Wednesday unveiled a first look at Greenleaf, its upcoming drama series (premiering Tuesday, June 21, at 10/9c) set against the backdrop of a sprawling Memphis megachurch. Scroll down to see a snapshot of Oprah (left) as Aunt Mavis — her first recurring role on a scripted series in two decades: 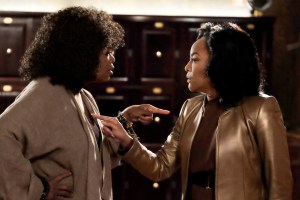 * On the heels of its March 10 finale, Showtime’s docuseries Dark Net — which explores the dangers of the deep web — has been renewed for a second season.