Aaron Paul has seen the light — quite literally, in fact.

The Breaking Bad alum is at the center of Hulu’s official poster for The Path, its upcoming drama created by Parenthood producer Jessica Goldberg.

Premiering Wednesday, March 30, the series stars Paul as Eddie Lane, a family man who is drawn to the center of a controversial cult as he and his wife (True Detective‘s Michelle Monaghan) struggle with relationships, faith and power. Hannibal‘s Hugh Dancy co-stars as Cal Roberts, the enigmatic leader of the titular cult.

Scroll down to see the key art, in which Paul’s Eddie has his eyes opened to the strange happenings around him. 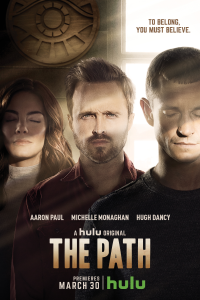 * Fox’s Prison Break continuation has cast relative newcomer Amin El Gamal, TVLine has learned exclusively. He will recur heavily in the role of Cyclops, who plays an integral part in the nine-episode revival.

* Christina Aguilera will exec-produce the game show Tracks, which will debut as a half-hour special on Spike TV later this year. The game show will require a team of two to name a song title just by listening to its individual tracks, such as guitar, bass and vocal.

* Showtime on Tuesday announced production on a Whitney Houston documentary, which will explore the iconic singer’s complicated life and career. Nick Broomfield (Kurt & Courtney) will produce, direct and narrate the film.

* On the heels of winning the Oscar for Best Adapted Screenplay, The Big Short screenwriter Charles Randolph is developing an untitled drama at Amazon. The project is described as a multifaceted, realistic look at what it would take to create a present-day civil war in the U.S.