Empire will close out Season 2 with the mother of all showdowns.

Co-star Kaitlin Doubleday, whose pregnant alter ego Rhonda was last seen getting pushed down a really long and bumpy flight of stairs by an unknown assailant, told TVLine Friday at PaleyFest that the identity of the perpetrator will be revealed in the season finale.

“She realizes who pushed her and… she gets to confront [him/her] in a very dynamic, scary, insane, crazy way,” Doubleday teased. “I think the audience [will 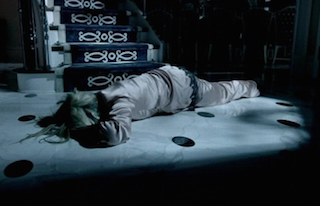 be] waiting for that confrontation for all eight episodes.”

And don’t assume the attacker is Crazy Anika, Doubleday cautions. “It’s weird because it started out as a certain person, for sure,” she admitted. “Then it changed for a bunch of episodes. There were a good five episodes we shot that I didn’t know who pushed me. Then they [settled] on somebody [and] that’s when she finally realizes, ‘OK, it was this person.'”

Doubleday, meanwhile, also shared that shortly after Empire returns on March 30 (9/8c, Fox), Rhonda will team up with Lyon Family Enemy No. 1. “Rhonda actually ends up working with Camilla,” shared the actress of Naomi Campbell’s character, who wrestled control of Empire Entertainment from Lucious in the fall finale. “There are some strange, weird alliances that happen that are unexpected in the next part of the season that involve Rhonda.” (Reporting by Vlada Gelman)