Criminal minds lurk and work beyond the borders of the United States — ergo, the title and concept of the Criminal Minds spinoff premiering Wednesday at 10/9c.

TVLINE | I was just looking at an old interview we did, from almost 10 years ago, where we were talking about how busy you were with CSI: Miami, Charmed, Smallville, Book of Daniel…. And here you are again, not at all lacking for work since Forever ended.
Thank God. You know, it’s pretty cool. I sort of just kind of pinch myself and think how very grateful I am.

TVLINE | It’s kind of funny for actors that way. Sometimes when it rains, it pours.
You never know. People always ask me, “Does it make you nervous when a show ends, about what’s going happen?” I’m like, it’s part of the journey of being an actor. You kind of ride your waves, and go with the punches.

TVLINE | Might you have stayed with Scorpion this season if Beyond Borders hadn’t come along?
Yeah. I really enjoyed Scorpion, that whole team. Not only the actors, but behind-the-scenes people as well. They were super-cool, so I definitely would have continued.

TVLINE | How is Beyond Borders‘ Clara different from anyone you’ve played before?
I love Clara. She is probably most “like me” of any character I’ve ever played. I’m definitely not as intelligent as her, nor am I a cultural anthropologist, but she rocks the linens and a Glock. She’s just kind of chill. I remember at my first fitting, I was talking to them about shoes and whatever, namely how I cannot stand high heels, and the wardrobe designer looks at me and says, “Oh, they only want you in flats.” I was like, “What? This is my dream job.”

TVLINE | I was going to say, this is probably your most comfortable wardrobe ever. Cargo pants, loose tees….
Yes. That’s my life. Clara is also different in that she’s a linguist, and I didn’t realize she was actually going to be speaking different languages, so when I got the first script I just burst out laughing. I ran to my husband and said, “You’re not going to believe this. I speak Thai.” He goes, “Oh you do? How much?” Then I held up the script: “No, she speaks Thai, and he said, “Oh dear god.” It was really funny.

TVLINE | And you went into this knowing how many languages…?
Two others, maybe? And I’m not even fluent in the second. Like, I know a little Italian. I know a lot of Spanish. But I’ve learned a lot with the different interpreters that we’ve had on set, because you have to understand what you’re saying. When I got the first episode where I speak Thai, the translator was incredible in showing me that if you go up at the end of a certain word, like a question, you’re saying a completely different thing.

TVLINE | You must have learned a lot, period, because I’m watching these episodes and Clara knows little vittles about each culture. Can you give me a particularly curious example of one?
In one episode, we talk about the Blue Man Tribe, and the interesting thing about that is that basically the women are the head of these tribes. 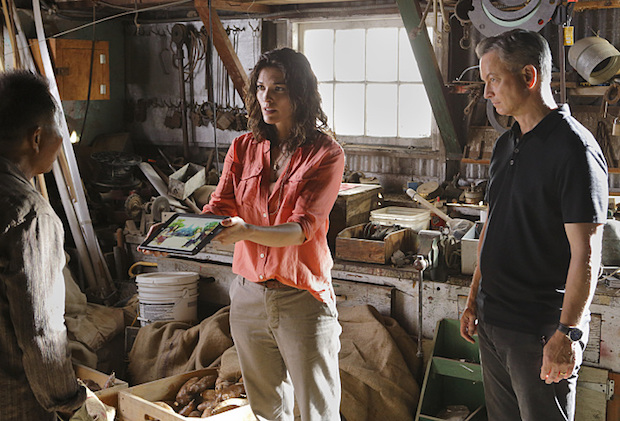 David Caruso and Gary Sinise you’ve now worked with two of the top CSI guys ever. What does Gary bring to the table?
Gary is honestly one of my favorite people I think I’ve ever worked with. He is not only just incredibly talented to be able to work with, but he is kind, and funny, and just a wonderful human. He has the Gary Sinise Foundation that works with veterans, and it’s just the most beautiful thing you’ve ever seen. I used to say to Gary, “How do you do this? How do you shoot for 12 to 15 hours and then hop on a plane and fly overnight and do these events on the weekend? And do it all again the next week?” And within 20 minutes of visiting him at one of these events, seeing him support all these men and women, I realized, “This is how you do it.” These are the real heroes. You live off of love and support.

TVLINE | How would you describe Clara’s dynamic with Jack? At the end of first episode, it’s clear they’re pretty close.
Clara is very close with Jack, because they have gone through things in the past together. They’ve been friends for years, so I think that they have that deep friendship and support for each other. I think that they probably have shared things within that partnership that others haven’t, like moments and feelings. He knew my now-deceased husband — we were all friends back in the day, so there is a connection that runs a little deeper — which is pretty cool.

TVLINE | I just watched the episode where they pop open an organ harvest victim’s eyes and the sockets are empty. What’s the freakiest thing you’ve seen in the episodes filmed thus far?
Man, they are intense, aren’t they? And yet so much fun. I hate anything that has to do with the eyeballs, and we have an episode where these wooden dowels are jammed into eyeballs. And there is one with tongues split down the middle. Creepy. Gross. Our special effects, the makeup team, they’re all so talented.

TVLINE | What’s been Alana’s wildest travel experience? Your best example of a vacation gone wrong?
Oh, I have so many. When I was younger, I used to travel all over the world, and I was once deported from South Africa. I was living in Cape Town and I had flown to Thailand to do a commercial, and when I came back in, they said, “You don’t have a re-entry visa.” All I had was a work visa. I had to pick a different country to go to, so I went to Namibia, [and along the hotel jogging path there was the sign that said — and I am not joking — “Beware,” with a picture of a baboon and a lion. Yeah. I went back to my room and felt sorry for myself. 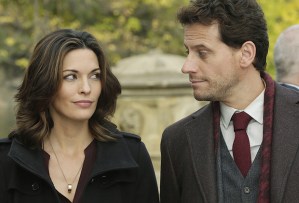 Matt Miller has said that if this series had gone forward, Joe would have gotten to Paris “someday.” Were you you privy to the longer-term plan for your character?
No. Not really. There were ideas that he had told us, but he wasn’t kind of definitive on any of them, so “yes and no” I guess is the answer. But I sure did love Forever.

TVLINE | It’s a crazy-passionate fan base. They love you guys, and to this day are still clamoring for more.
I know, and that is so wonderful. It makes me so sad that we didn’t get to give them more, but yeah, it was a really fun show.

Want more scoop on Beyond Borders, or for any other show? Email insideline@tvline.com and your question may be answered via Matt’s Inside Line.