Agents of S.H.I.E.L.D. this Tuesday left viewers with quite a curious eyeful, in the form of a butt-naked Being FKA Grant Ward dripping wet with… honey?

At least, “honey” is what the cast and creatives were calling the stuff used to coat the unclothed Brett Dalton, for the closing scene that teased Hive’s mysterious “consumption” (?) of five human sacrifices. Despite having been given a heads-up weeks in advance (to get in the best shape possible), “Brett actually did not have a good time,” showrunner Maurissa Tancharoen reports. 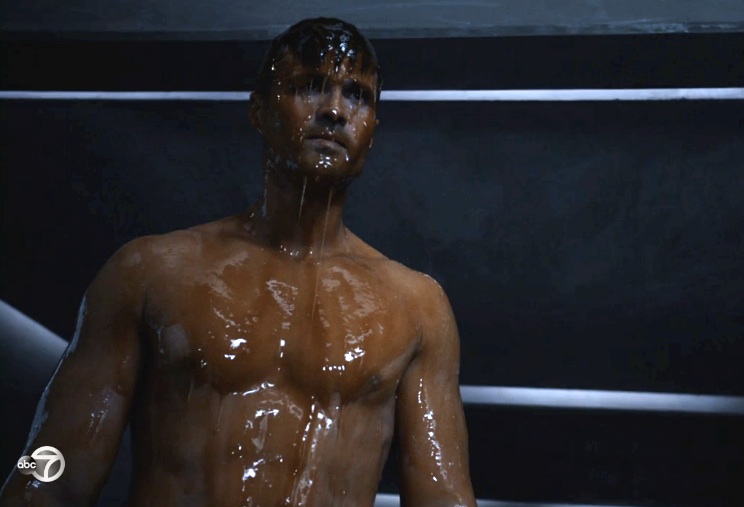 “We promised that the goo was going to be slightly warm, and we attempted to warm it, but after a while it got… a little cold.”

Executive producer Jeffrey Bell says the tactile moment was in part inspired by a photographer’s online portraits of people and babies covered in honey. “We thought, ‘This is kind of like a birth, and we should do that for [Hive].’ But we didn’t take the [temperature] into consideration!”

Says Dalton himself, “I was all for it — ‘Put me in, coach! Let’s do another!’ And all through the day they were telling me how they’re warming up this goo.” But not only was the end product cold, “It got everywhere you imagine goo could go,” the actor confirms. “This was as close to a nightmare as I’ve had on this set!”

As for what exactly Hive did with the quintet of humans to wind up looking jacked yet gelatinous, Bell will only say, “That will be laid out” in a future episode.

The episode’s very final, “bonus” scene, meanwhile, revealed that a curiously incommunicado Bobbi and Hunter had gone rogue and stowed away in “the belly of the beast,” as in the jet on which Gideon Malick escaped with a Russian compatriot from the symposium on Inhuman treatment.

“Hunter prefers it when he’s not working under the jurisdiction of S.H.I.E.L.D.,” says portrayer Nick Blood, “and this is an opportunity where they’re on their own, where they can put their phones on airplane mode and make up their own rules.

“And when they are on their own together,” the actor continues, “you see how they compliment each other.” So much so that they’re most wanted for a spinoff, one might say.

The S.H.I.E.L.D. team is tight-lipped on the timetable for whatever it is that might set the stage for Marvel’s Most Wanted, while Tancharoen will only say of Bobbi and Hunter’s next move, embedded there under Malick’s nose, is that it will be a “rip-roaring adventure.” (With reporting by Scott Huver)

What did you think of the episode “Inside Man,” including the brewing debate about a possible “cure” and Daisy and Lincoln’s hook-up?