We really hope Jordan hasn’t put a down payment on a wedding venue yet.

TVLine’s exclusive first look at Tuesday’s Pretty Little Liars season finale (Freeform, 8/7c) finds Hanna in close quarters with a certain ex-boyfriend, and if history has taught us anything, it’s that sleuthing often leads to smooching.

Of course, “Haleb” is just one of the ‘ships catching wind in its sail during the PLL finale. As we previously reported, each of the show’s main (yet currently defunct) couples — Aria and Ezra, Spencer and Toby, Emily and Alison, and Hanna and Caleb — will have a special moment during the final hour of Season 6. The former flames will find themselves teaming up as their stalkers’ deadline to turn over Charlotte’s killer arrives.

But the real meat of the finale will be the unveiling of the show’s secret twin, a twist showrunner Marlene King refers to as the “biggest reveal of all.” (Yes, even bigger than last summer’s “Charlotte is ‘A'” event.)

Browse our exclusive finale photo below, then drop a comment: Do you hope Hanna and Caleb get back together? And who’s atop your list of potential twins? 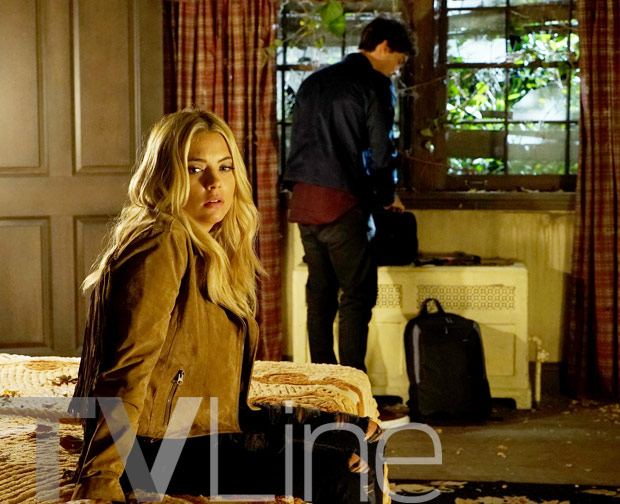