In the milestone hour, titled “Scope” and airing Tuesday at 8/7, Gibbs’ team re-examines an ambush on a group of Special Ops snipers in Iraq after an American couple is attacked in the same area six months later. When Gibbs discovers he needs the account of the lone survivor, Marine Gunnery Sergeant Aaron Davis (played by Diggs), he tries to connect with the wounded warrior who is being treated for PTSS at Walter Reed Medical Center.

Specifically, Sgt. Davis is part of the MusiCorps rehabilitation program, setting the stage for a special, musically tinged hour (in which the MusiCorps band itself performs).

Pegging a story to MusiCorps “is something we’ve been talking about for a while,” says showrunner Gary Glasberg, who penned No. 300 with executive story editor Gina Monreal. “Gina brought this organization to my attention, and it’s really amazing what they do, so we’ve been talking about doing a storyline that was sort of focused on them and a character working with them. And as we got closer to 300, knowing the elements that we write to include in a special episode like this, where we want something for everyone — the action and suspense and the humor that we usually try to deliver — and to have a patriotic emotional core to it as well, this seemed right.”

Of course, the NCIS boss set quite a high bar to clear in casting Sgt. Davis, seeing as he’d need an actor with not just gravitas but considerable musical talent as well. Enter Diggs, a veteran of numerous Broadway shows (as well as TV’s Private Practice and now Murder in the First).

“We knew that we needed somebody with some real musical chops, and when Taye read the script, he was eager to come do this with us,” says Glasberg. “And we were super lucky to get him, because he does some really, really beautiful scenes with [Mark] Harmon.” 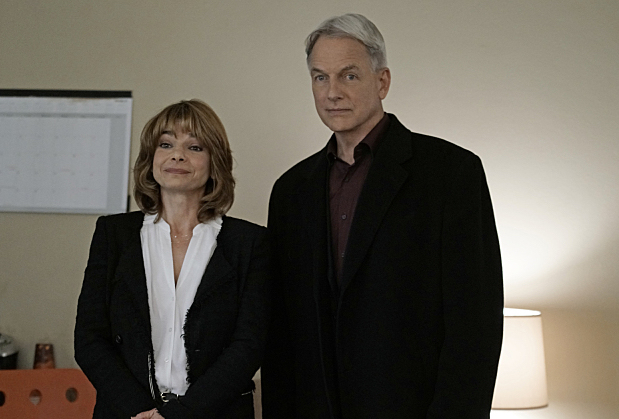 As Gibbs gets to know the recovering sniper, it will touch upon issues the NCIS team leader has himself been contending with, ever since getting shot in the Season 12 finale. “It definitely delves into some of the psychological stuff that he’s been wrestling with all season, that started with Jon Cryer (as Dr. Cyril Taft) and continues with Laura San Giacamo (as therapist Dr. Grace Confalone),” Glasberg previews. “Gibbs learns some things about himself along the way.”

Not to worry, the team at large — DiNozzo, McGee, Bishop et al — will get pulled into the “significant case” at hand, as it is discovered that Davis’ sniper rifle has been stolen. “Everybody gets a piece of the pie, and there are some fun, unexpected, juicy tidbits that will be in there,” the EP teases. “We tried to make the 300th as entertaining as possible, and there are a couple of things here and there that will be seeding us toward the end of the season as well.”

The only thing perhaps missing are any “hidden 300s” for viewers so spy, to very specifically honor the landmark hour. “You mean like at Disneyland, looking for Mickeys? No,” Glasberg says, laughing at the suggestion. “But there are definitely some little ‘cookies’ in there that I think people will enjoy.”