One-and-a-third seasons in, AMC’s Better Call Saul has been extremely sparing with the Breaking Bad cameos — but a fun one popped up at the tail end of this Monday’s episode.

Capping an hour that was otherwise wonderfully Kim-centric, banged-up-and-bruised Mike was approached at the diner by a stranger, someone who wanted to discuss Tuco Salamanca’s imminent sentencing and incarceration:

“He really did a number on you,” Tio observed upon climbing into a booth opposite Mike, who last week invited a beating from Tuco in the name of putting the tough behind bars. After apologizing “on behalf of my family,” Tio casually opined that his nephew deserved “much less” than the eight to 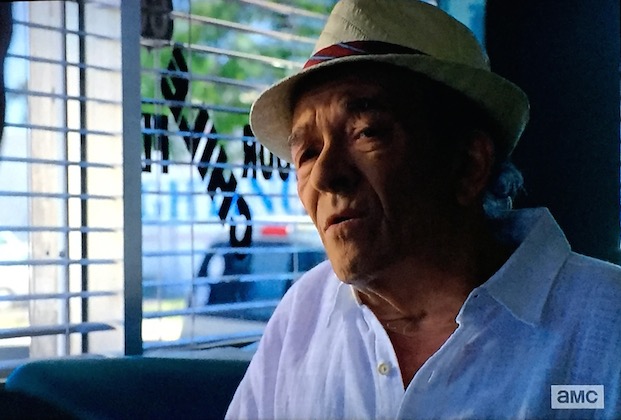 10 years he likely will be sentenced, for battery, possession of a weapon plus robbery.

Rather, Tio would “like” for Mike to “tell the police that the gun was yours,” grabbed by his nephew during a heated scuffle over a fender bender. In helping negotiate that “best possible outcome for everybody,” Mike would receive $5,000 — “for your trouble.” And then the deceptively reserved man up and walked away, leaving Mike much to ponder, including: Who was that guy?

(Series boss Vince Gilligan revealed at a weekend PaleyFest event that yet another Breaking Bad “return” was penciled in for this season’s finale, but ultimately scrapped. Per Deadline, he said, “We had an idea for … a perfect opportunity for a cameo which we didn’t wind up doing. It was an organic and logical possibility for a particular someone to show up, but… I got talked out of it. I’m glad I [did], because it would have distracted from a very important thing we were doing in that moment.” Theories? Walt? Jesse?)

But again, this week’s episode focused largely on Kim, who valiantly spent much of the hour making cold call after cold call, endeavoring to land a major client that just might get her out of the dreary dog house known as “doc review.” For her effort, she brought in no less than $250,000 in new billings, from a bank. After their successful pitch to the new client, Kim began laying out a strategy plan… when Howard cut her off and said her plate would be full with (the dreaded) doc review.

Even more demeaning, upon bumping into Chuck way early the next morning/at the end of a late night for her, Kim was first sent for coffee — but then treated to an anecdote about the family that put things a bit more in perspective. Better yet, Chuck said he would speak to Harry about ending her professional purgatory, and then he gave her perhaps what in the meantime meant most: a “Good job!” for landing a big shark.

As for Jimmy, his plight during the episode was to be “babysat” by a second-year associate, one who delivered many “house style” notes on his paperwork and wouldn’t allow him to bribe a court clerk (with a Beanie Baby!) to secure a choice hearing date.

What did you think of Better Call Saul‘s latest dip into the Breaking Bad waters, complete with the line cook’s bell “ding!”?