Attention, Bachelor Nation: If you don’t want to know who “won” Monday’s Most Dramatic. Finale. Ever., avert your eyes, because you’re about to be spoiled.

After telling both Lauren Bushnell and JoJo Fletcher that he was in love with them — not the most boneheaded move in franchise history, but a questionable one all the same — Ben Higgins at last popped the question to… Lauren!

In the two hours that preceded Ben’s proposal (and Lauren’s immediate acceptance of it), both ladies met Ben’s parents, and Mrs. Higgins had the exact reaction you’d expect from a woman whose son is in love with two girls: “I find that really disturbing.” Puh-reach, Momma H. 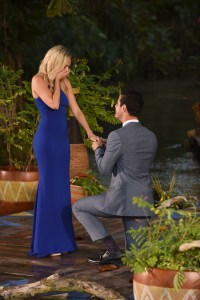 The family introductions were followed by Ben’s final one-on-one dates with his girls — one of them much more emotional than the other, as JoJo sat on a bathroom floor with her potential fiancé and asked for some comforting words before Ben made his big choice. (In response, Ben admitted to JoJo that he’s also in love with Lauren and has told her as much. Not comforting, Higgins!)

In the end, after picking out a sparkly Neil Lane engagement ring and telling the home audience about four dozen times that he “feels lost,” Ben opted to slide that diamond on Lauren’s perfectly polished finger.

That’s not to say Ben relished saying goodbye to JoJo. After watching JoJo’s Break-Up Limo drive off, Ben admitted that he loved her — so much, in fact, that he wasn’t sure if he should propose to Lauren. (But don’t worry about JoJo. She’s the next Bachelorette, and she’ll be juuust fine.)

“Lauren, I never want to say goodbye to you,” Ben told his wife-to-be upon her arrival. “I want to wake up every morning and kiss you on the face. I want to go to bed every night, knowing that I’m going to wake up next to the most beautiful woman I’ve ever laid eyes on.” And then Lauren and Ben argued over which one of them is the luckiest person in the world. (Aww! Their first fight!)

With that, I turn it over to you. Did Ben make the right choice? Hit the comments!