In just 35 seconds, the new teaser trailer for HBO’s Vice Principals puts a spotlight on the real political showdown: “Who y’all pullin’ for in the vice principal race?” star Danny McBride (Eastbound & Down) asks a hairnet-wearing school cafeteria worker. (Based on McBride’s treatment as he walks among the lunch tables, we’re betting the answer he gets isn’t the one he wants.)

The promo introduces us to McBride’s Neil Gamby, who finds himself in a power struggle for the top position — high school principal —  with fellow VP Lee Russell (played by Justified‘s Walton Goggins). (Keep your eyes peeled for Cougar Town‘s Busy Philipps, The New Normal‘s Georgia King and Devious Maids‘ Kimberly Hebert Gregory, too.)

The half-hour comedy is set to run 18 episodes over two seasons; Season 1 will bow in July.

So press PLAY on the trailer at the top of the post, peruse the poster below, then raise your hand if you (like us) think it’s funny for a man to be hit in the face with meat. (Yeah, we thought so.) 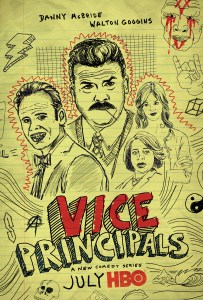