Rather than addressing last week’s fan-crushing tragedy — the name “Lexa” was uttered a grand total of zero times — Thursday’s episode of The 100 focused on a different crisis: the war at home.

While we, the viewers, know the solution to the Grounder blockade is to hand Pike over on a silver platter, I don’t see the Chancellor’s blind followers making that happen anytime soon. (Don’t you hate when the people in your TV refuse to hear you screaming at them from your living room? I’m starting to think there’s a communication error here.)

With a small army of supporters at his disposal, Kane managed to get Pike all the way to Arkadia’s front gates, but the Chancellor’s loyal followers — including Bellamy, in whom I’m seriously starting to lose faith — cut him off at the pass. Despite Kane’s plea for mercy, Pike laid down the law: “For the crimes of treason, kidnapping and attempted murder,” the Chancellor declared, “I sentence you to death.”

Honestly, I don’t know which is worse: that Kane could be The 100‘s next big death… or that we have to wait until March 31 to find out. (Here’s hoping Bellamy’s end-of-episode turnaround will be enough to save the day.) 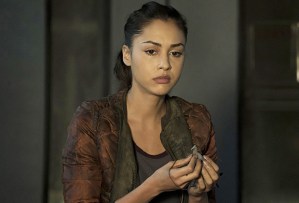 On a somewhat lighter note, this week’s episode fully restored my faith in Raven. While working with Jasper to retrieve the chip maker, she was reminded of happier times with Finn — as much as she could remember, anyway. She’s starting to realize that her pursuit of the City of Light is costing her memories, possibly even her humanity, and Alie was none too pleased to see her turn tail and run mid-mission.

Fellow earthlings, do you think Pike will follow through with Kane’s execution? Do you have any faith left in the once-heroic Bellamy? Drop a comment with your thoughts on this week’s episode below.